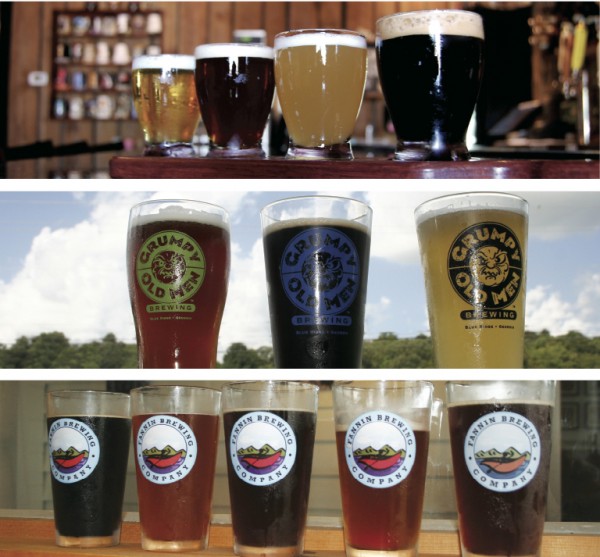 Clay tablets found dating back to the 5th millennium BC in Mesopotamia indicate that brewing beer was a respected craft/job and that most of the brewers were women. In fact, the brewer’s craft was the only profession in Mesopotamia which derived social sanction and divine protection from female deities/goddesses, specifically: Ninkasi, who covered the production of beer, Siris, who was used in a metonymic way to refer to beer, and Siduri, who covered the enjoyment of beer.

Fast-forward to the 19th century and you’ll find that Fannin County, GA already had a long history of secretive mountain moon shining and home brewed beer.

The 20th century and Prohibition forced even more home brewers and distillers further underground, thus fostering fast cars, rum runners and the birth of NASCAR. In the meantime, copper mining and the production of sulfuric acid in Copperhill, TN chugged on employing many residents, but totally stripping the area of its lush vegetation and abundant wildlife. The copper mine closed in 1987, although sulfuric acid production continued well into the 1990s.

Levi’s, one of largest employers in the region, opened its Blue Ridge doors in 1959. While a boon to the local economy, the factory was also another source of extreme pollution and ecological devastation. When Levi’s closed its doors in 2002 the local economy went bust.

Reforestation, ecological cleanup and diligent management of the Toccoa/Occoee River has brought back much of the original beauty and clean mountian waters that you see today. With this eco-revitalization came weekend cabin owners/renters from Atlanta, retirees from Florida and the growth of tourism. As the out-of-town populations grew so did the demand for more restaurants and shops. Beer and wine were available in some stores, but a drive to Ellijay, GA or Murphy, NC was necessary to purchase liquor.

In 20009 the Blue Ridge passed laws allowing sales of bear and wine in restuarants, followed by liquor in 2012. Sunday sales of beer, wine and liquor passed into law just this spring. While the GA State distribution laws still on the books are somewhat archaic and not amenable to the small breweries and wineries, much has changed for the better. Currently the Craft Brewers Guild and the Georgia Restaurant Association are working to push through a bill allowing “to go” sales on premises and eliminating the need for a distributor.

Call it what you will– Agrotourism, Alcohol Tourism or whatever– our local wineries, and now craft breweries are bringing much needed revenue to Blue Ridge and surrounding areas. They are providing jobs, creating sustainable products, and building our community. The most awesome thing about this? There are no harmful by-products to ruin the majestic beauty of our Appalachian Countryside.