The One That Got Away 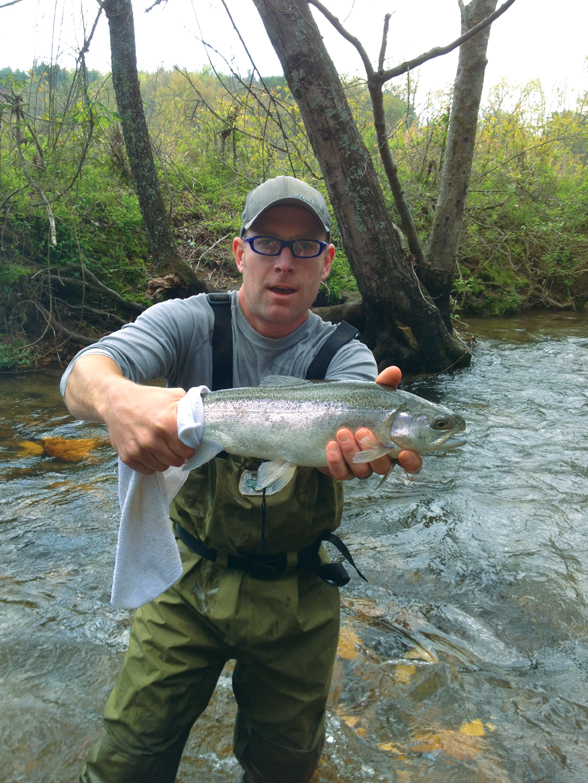 Fishing has been a part of my life for as long as I can remember. My Dad used to wake me up well before daylight to get us to the water “on time.” Back then, I was having fun as long as we were catching fish. I remember plenty of days that we didn’t, and for a seven year old that made for some long days on the lake.

As I got older, I went through a period of time that I didn’t fish at all. But at age 19, something changed. I started fishing again, this time on my own, and with a new passion. My Grandfather taught me how to cast a fly rod when I was young, catching mostly bass and bluegill in farm ponds and small lakes. We didn’t really have the opportunity to catch trout in that part of the state, so when I moved to the southeastern part of Kentucky, close to the upper Cumberland River, I finally had my chance.

Not really knowing what to use for tackle, I stopped in a small bait and tackle shop for some suggestions on what flies to use. I chose a few different patterns and headed for the water. The tailwaters of Lake Cumberland fluctuate according to the generation schedule. When the turbines are off, the tailwaters resemble a large flat river that you would see out west. As I cast my wooly booger over and over, I noticed the water beginning to rise, creating an eddy behind one of the boulders I was casting toward. I had no idea what I was doing but I had seen “A River Runs Through It,” so I gave it my best Robert Redford, laid the fly right in front of the big boulder, and Bang! I felt a huge tug on the line and it was on. After about 10 minutes of fighting, I pulled in my first ever trout, a 23 inch, 5 pound monster Brown Trout. Obviously I was hooked.

Speaking of monster trout, North Georgia is loaded with them. There are nearly 4000 miles of trout streams in the state, the majority of which are in the Northeast region. These waterways vary in size and structure giving the trout angler ample opportunities to try different techniques to land a trophy trout. Since moving to the area three years ago, I had already heard of North Georgia as a trout fishing destination, so I had great expectations of becoming a “master” of fly fishing for trout. I began trying different spots on the upper and lower Toccoa as well as some smaller streams close to my house. I tried everything in my arsenal but seemed to have little success. After about a year of losing confidence, I found myself trout fishing less and less. In fact, last year I only went fly fishing three times and caught one fish.
One day while eating at the Iron Bridge Cafe (located on the Toccoa River outside Blue Ridge, GA) Gene Rutkowski walked in. Gene is a long-time fishing guide and owner of Upper River Adventures, who specializes in guided fly fishing trips for trophy trout. I met Gene a couple times and we actually shared some fishing stories, but I never really considered a guided fishing trip. Like every other conversation I have had with Gene, I immediately started asking questions about fishing. Suddenly, it dawned on me that my next article, which happened to be on fishing, could use a “guest expert” so I asked Gene if he would mind answering some questions.

Gene responded, “You wanna go fishing?” My immediate answer was “Are you kidding? Hell yes!”

Upper River Adventure’s headquarters sits right on the banks of Big Creek. Gene manages a stretch of this beautiful mountain stream that is surrounded by private property, which means that these waters only see fishing pressure from Gene, his clients, and a couple of neighbors. The results are huge trout, and lots of them.

When I arrived, Gene was ready to go. He had all the gear I would need for the day including waders, fly rod, and lots of different flies. Fly fishing typically takes a little work to get prepared for but that’s not the case when you fish with Gene. He does the tedious things for you so you can focus on casting. If you are new to fly fishing, he will show you how to cast. If you have some experience, he will show you what you are doing wrong and how to improve.

Well, it turns out that I have been doing a few things wrong for a long time. After about five minutes of instruction, we did some “roll casting” to a deep hole in the bend of the creek behind his house. Gene had me fish the same area much longer than I would have if I had been on my own, and it paid off. Ten minutes into the trip I landed my first fish. A two pound rainbow trout is a good fish in anybody’s book, but evidently not according to Gene. Without a snapshot, we release the first fish. Within ten more minutes I landed my next (much larger) native rainbow. This was basically the trend over the next four hours with a total of seven fish landed, four of which were 20 inches or larger.

Each fish put up an incredible fight, but the greatest battle of the day had to go to the one that got away. About three fish in, I started fishing a dry fly, more specifically, an elk-hair caddis. We were in the middle of a hatch so the trout were going crazy. Gene’s choice of tackle immediately paid off. I felt a quick tug and set the hook. Fish On! As the beast rolled completely out the water Gene yelled “let her run, let her run!” Run she did. For a solid 15 minutes she ran and ran, occasionally slowing down enough to get a few cranks on the reel but she was relentless. Well into the battle, Gene saw a chance to get her in the net, but every time we got close she would shoot back to the deep pool. At this point I started to worry about my line breaking and in an instant, poof! She was gone. I couldn’t believe it! According to Gene the fish was at least 10 pounds. In fact, he said that the battle I just lost was probably the longest one he has seen on Big Creek.

What a day. In four hours, I caught my biggest trout to date, learned the most effective techniques that I have ever seen, and made a new friend (that will hopefully take me fishing again!). This was indeed one of the best fishing trips I have ever had. In the words of Gene Rutkowski: “North Georgia is not just a trout fishing destination, it’s a trout fishing mecca.”

There is every type of trout fishing experience available in North Georgia, from small creek stalking to drift boat trips in big water. If you’re like me, you will want to sample different streams and different types of water, so be sure to check out www.georgiawildlife.com for more information. If you want to have a dream-like fly fishing experience then I highly recommend contacting Gene at www.upperriver.net. You won’t be disappointed.