-->
Home › Arts+Culture › History › The Legend of the Cherokee Rose

The Legend of the Cherokee Rose 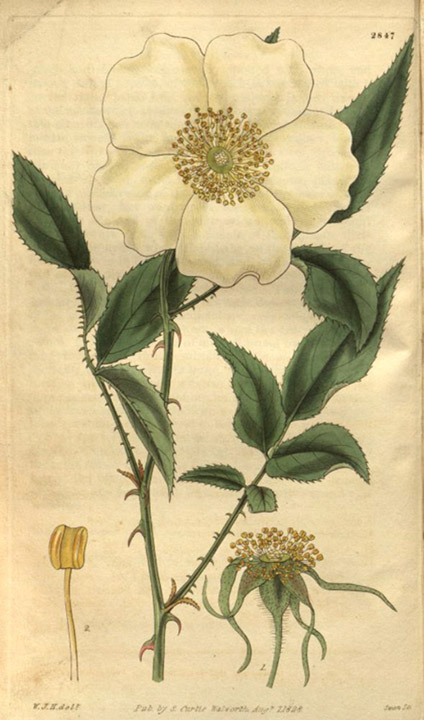 When gold was found in Georgia, the government forgot its treaties and drove the Cherokees westward to Indian Territory of Arkansas and later Oklahoma. Approximately one-fourth of the Cherokees died on the journey. The trail west started the end of May to mid-June 1838 and the mothers were grieving and crying so much because they were unable to help their children survive the journey.

The legend is that many of the real Cherokee people died from the hardship they endured from the time of the white man dishonoring their treaties to the weeks they endured in the camps in Tennessee waiting to travel to the new lands. So one night after they had made camp along the Trail of Tears, the old men sitting around the dying campfire called up to the Great One in Ga lu na ti (heaven) to help the people in their trouble.

The Great One said, “Yes, I have seen the sorrows of the women and I can help them to keep their strength to help the children. Tell the women in the morning to look back where their tears have fallen to the ground. I will cause to grow a plant. I’ll make the plant grow so fast at first that by afternoon they’ll see a white rose, a beautiful blossom with five petals. In the center of the rose, I will put the gold to remind them of the gold which the white man wanted when his greed drove the Cherokee from their ancestral home.”

The Great One said that the green leaves would have seven leaflets, one for each of the seven clans of the Cherokee. It will have thorns on every stem to protect it from anything that tries to move it away.

The next morning the old men told the women to look back for the sign from the Great One. They watched as a blossom formed, so beautiful they forgot to weep and they felt beautiful and strong. By the afternoon they saw many white blossoms as far as they could see. The women began to think about their strength given them to bring up their children as the new Cherokee Nation.

This symbol exists for the pain and suffering of the “Trail Where They Cried” in the Cherokee language is known as nu na hi du na tlo hi lu i. The Cherokee Rose continues to grow along the routes of the Trail of Tears all the way into eastern Oklahoma today.

The Cherokee Rose climbs over other shrubs and small trees to heights of up to16–33 feet. Leaves are 1-4 inches long, and the flowers are about 3–4 inches in diameter.
The species– native to China, Taiwan, Laos and Vietnam– was introduced to the southeastern United States in about 1780, where it soon became naturalized, and gained its common name of ‘Cherokee Rose.’ Used mostly for forming hedges because of its quickness of growth, facility of culture, strength, durability, and beauty.

At the urging of the Federation of Women’s Clubs, the Cherokee rose became Georgia’s state flower on August 18, 1916. The Georgia General Assembly adopted Joint Resolution number 42 stating that Georgia had selected the Cherokee Rose because many states had official state flowers that were “indigenous to the soil of the State.

The resolution referred to the Cherokees as “aborigines” in the text of the document that makes the camellia rose the Georgia floral emblem. It also made the mistake of stating that the Cherokee rose was an indigenous plant that grew in every county.

Leslie Barker Thomas is a resident of Ellijay and the President of the Gilmer County Historical Society, President, Georgia Chapter Trail of Tears Association and Communication Chair CartecayUMC.