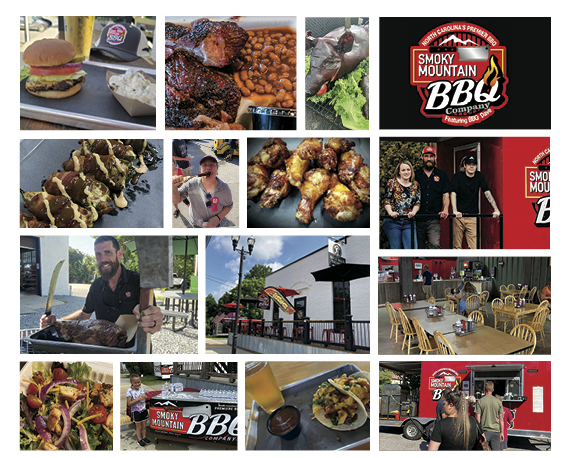 Being born and raised in Murphy, NC, one of ‘BBQ Dave’s’ first jobs as a teenager was working at a barbecue restaurant near the Tennessee line which means he’s been cooking barbecue more than half his life. Dave says, “I’ve worked many other jobs but my BBQ is something that has always made people around me happy. I cherish the fact that BBQ brings people and communities together which has always been important to me. I’m not good at much of anything most days, but I can back a trailer and I can smoke some BBQ!”

Smoky Mountain BBQ Company was founded in 2021when several catering companies contacted Dave requesting that he start his own BBQ catering gig. Dave had been out of commission for a year recovering from a motorcycle accident, so this was his chance to jump back in the game. Dave and Emily Handford decided to take the leap and purchased a concession trailer.

News traveled fast that ‘BBQ Dave’ was back! Requests poured in and the business blossomed providing the customer base needed to support a brick-and-mortar restaurant. Only one year later on June 28th, 2022, they opened their Downtown Murphy restaurant located in The Historic Mill Building.

Moving into the Mill Building gave the Handford’s the opportunity to expand the menu. Developing his recipes by trial and error and sharing his creations with family and friends, helped BBQ Dave decide which items would keep customers coming back. And come back they do! Favorites include delicious pulled pork, ribs, burgers, JW Smoky Dogs and Dave’s Famous ‘Best in the Tri-State’ Brisket– which also comes as a Brisket-Mac Taco, yum. Salads, outstanding sides, great folks, and fun events like Live Music and Prime Rib Night make Smoky Mountain BBQ the place to be.

Smoky Mountain BBQ is also the first barbecue restaurant in Cherokee County to serve beer. Pair a cold beer with Dave’s award-winning brisket, and all is well with the world. General Manager Zachery Hales, a trained chef who graduated at the top of his class with a culinary degree, keeps the beat going strong. Emily and David Handford love their work and totally enjoy sharing the fun of running the restaurant. So, come on out and enjoy some BBQ, cold beer, live music, and daily events at the best BBQ restaurant in the area!