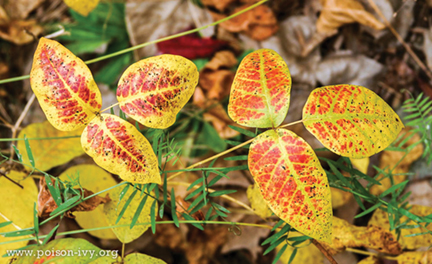 Over the years I’ve heard many people refer to poison ivy and poison oak as the same plant. Can these two plants be described interchangeably? Are these toxic plants one in the same? The answer is– while they both can cause an irritating rash– they are different. They are different in terms of the region they grow in and in their appearance. What they do have in common is that they are both members of the cashew family and produce an oil called urushiol (you-Roo-shee-all). Being able to identify these plants helps us to better avoid them.

Eastern Poison Ivy, Toxicodendron radicans: There are a couple varieties of poison ivy however Eastern poison ivy is most prevalent from the Mississippi to the East Coast. This is the big bad guy that we see in our area. Most of us have seen it climbing up a tree. However different varieties can grow on the ground, climb, and sometimes appear as a shrub. This is the plant that causes most of the misery since it grows on nearly every roadside, path, pond, stream, and beach from the Midwest through to the East Coast.
The leaves are shinny green and can change colors in the fall. They may appear orange or red with hints of yellow later in the year. All varieties have three glossy leaflets each with serrated or jagged edges that come to a point.

Poison Oak, Toxicodendron diversilobum: This plant typically grows out west, but can sometimes be found growing in southern states. However, I have a friend who teaches botany at Young Harris College and in all of his years of field-work he and his students have never identified poison oak growing in north Georgia. That said– poison oak leaflets look like oak leaves and usually grow with three leaflets per leaf group but sometimes can have up to seven. This plant typically grows as a shrub but can also grow as a vine. The leaves are generally green in the summer but turn red and orange in the fall.

Obviously, poison ivy and poison oak should be avoided. If you come in contact with either, you should shower as soon as possible. This will greatly reduce the risk of developing an irritating rash. If you do develop a rash, there are some good home remedies that can be found online to help you while things run their course. Some of these include lemon juice, baking soda paste, vinegar and a potato or cucumber mash, to name a few.

Never burn these plants as serious respiratory problems may develop. Systemic poison ivy is an extreme allergic reaction to the oils from the poison ivy plant. Breathing in the oils of the plant as it burns allows the oil fumes to travel from the lungs to the blood stream. Side effects may include extremely reddened eyelids, vomiting, chills/fever and an itchy blister-like rash. It’s also important to note that even if you have burned poison ivy before and had no health problems, your neighbors could be affected by inhaling the burning plant’s oils.

“Leaves of Three Let Them Be.”

Kevin Johnson is the owner of Green Leaf Lawn and Ornamental, LLC, based in Blue Ridge and is available for all of your lawncare needs. For more information about lawn care, the hemlock woolly adelgid and treatment options– Kevin can be reached toll free at (866)883-2420 or by email at growitgreen@etcmail.com.

Or check out his web site at www.wetreatlawns.com or visit www.hemlocks.org for more info.