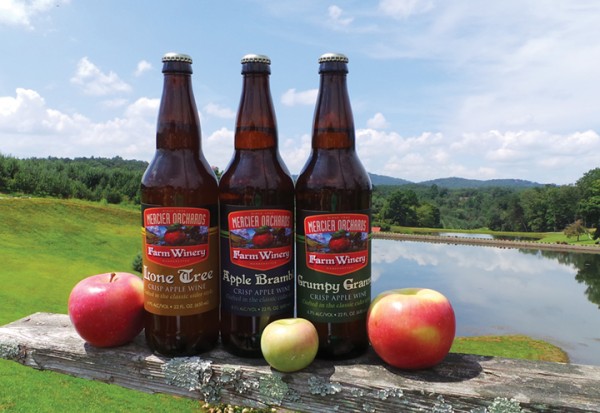 A Craft Hard Cider Renaissance in the Mountains

Ian Flom is the cidermaster at Mercier Orchards, a family-owned fruit farm located just outside of Blue Ridge. Mercier’s offers everything from U-Pick strawberries and apples to homemade apple fritters and local honey. The orchard, its acres expansive over rolling hillsides, is crowned with a massive country store, restaurant, and tasting room. Flom, a tall bearded man in his thirties, is cheerfully gregarious and eager to show me the entire facility, where apples are pressed, juice is fermented, and fizzy, alcoholic cider is made.

I stand in the tasting room in front of a long bar. The decor is rustic chic, with reclaimed wood planks and corrugated sheet metal everywhere. Bottles of apple wine and hard cider, all Mercier’s brand, are lined up in front of me like soldiers.

The driest and most traditional ciders are fermented until all the sugar from the original juice is gone. The result is tart and unmistakably alcoholic. Other ciders are “back sweetened” by adding fruit juice or sugar to them after fermentation. These are dangerously tasty, innocent and light.

We go from dry to sweet, and start with Legends. It’s roughly twice as alcoholic as beer. Ian won’t tell me what kinds of apples are in it—it’s a trade secret—but I can taste faint hints of something crisp and sour. The flavor is smoky and mellow, with a musty but pleasant finish.

Next is Adele’s Choice, named after the orchard’s original owner. Ian tells me that this cider in particular pairs well with various cheeses. The apples used were harvested early in the season before they had a chance to develop much sugar.

Grumpy Granny is made entirely from Granny Smith apples. It tastes very green, tart but smooth.

Old #3 is named after the original farm stand crates used by the Merciers, which were all mysteriously printed with that number. Made with Gold Rush apples, it’s back sweetened with apple juice. There is absolutely no alcohol taste and since they also sell it by the keg, I start silently planning my next party.
Black Bee is made of Arkansas Black apples and back sweetened with clover honey. This has a dark, seductive taste with strong notes of honey and fruit.
Apple Bramble is pale pink, with that musty vibe I’ve come to recognize. Blackberries jump out and the finish is smooth.

Just Peachy is a peach wine made from homegrown Mercier’s peaches and cane sugar. The flavor is fascinating; it tastes exactly like liquid cotton candy. The initial blast quickly gives way to a delicate sugarcane perfume that floats on my breath like a powdery cloud. Ian tells me he hears that exact description a lot.

Finally, there’s Rock Steady Red, which they’ve only just invented. Mercier’s had a bumper crop of strawberries this year and decided to make hard cider out of them. It’s a bright candy red and sharply delicious, without a hint of alcohol.

Our tasting done, Ian leads me to the production rooms where he shows me floating conveyor belts, where apples are mechanically sorted. Huge rollers crush the fruit while other machines remove the solids. Nothing goes to waste; apple pulp is used as animal feed and given to any farmer willing to truck it away. Pallets of bottles and jars are stacked high to the warehouse ceilings.

Ian lists some differences between craft cider and commercial cider. Large cider production relies on apples sourced from as far away as China. Homogeneity is the mass producer’s goal and flavor suffers as a result. Small operations like Mercier’s are dependent on the quality of that year’s harvest. Some ciders may be unavailable some years if certain apple varieties didn’t thrive. Craft hard cider is an art, and men like Ian are inextricably tied to the land and its natural cycles.

For all its conveyor belts, presses, and sorting machines, Mercier’s is creating a product using traditions thousands of years old. And when I taste the end result, it’s not hard to see why craft hard cider is making such a comeback. There’s a little bit of magic in every bottle.

Mercier Orchards is a family owned and operated apple orchard now in it’s 4th generation. Started back in 1943 by Bill & Adele Mercier, Mercier Orchards is now celebrating 70 years of fruitful harvest! The combination of our U-PICK events, Bakery & Deli, Market Store, and now our Farm Winery makes us a great choice for a day trip by yourself or with the family! Spend the day experiencing what makes us unique! We’re constantly improving our products and our store to give you the best experience that we can possibly offer.