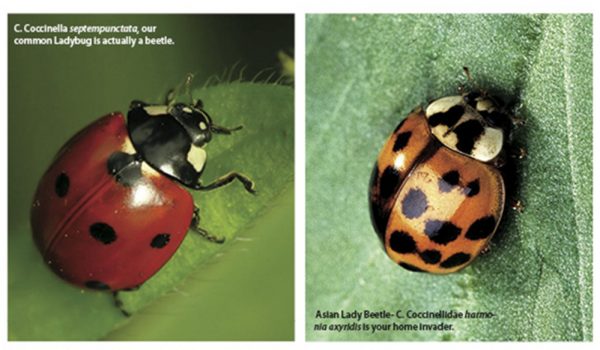 What’s not to love about ladybugs? They eat crop-destroying pests, and are said to bring good luck. But why are they in my house?

Ladybird, named so after the Virgin Mary, is a name that has been used in England for more than 600 years for the European beetle. As knowledge about insects increased, the name became extended to all its relatives, members of the beetle family Coccinellidae. This species was introduced in the US to combat plant pests as far back as 1916, and became known here as the Ladybug.

These days, the word Ladybug applies to a whole family of beetles, Coccinellidae or Ladybugs, not just Coccinella septempunctata.

Although most Ladybugs are harmless and good for the environment, the Asian Lady Beetle- Coccinellidae harmonia axyridis– is somewhat of an exception.

This species was introduced to North America in an attempt to control the spread of aphids. Since then, the Asian Lady Beetle has spread throughout the US and Canada, and has been a prominent factor in controlling aphid populations. Unlike its docile relative, this orange Ladybug can be a true pest.

Spotting the Difference Between Good and Bad Ladybugs

At a quick glance, it can be hard to tell the difference between the Asian ladybug and beneficial Ladybugs, partly because the color of the Asian species can vary from light tan or orange to bright red. But if you look closely, you will see the Asian Lady Beetle has a white marking behind its head in the openings of what looks like a black M. Some also have dark black spots, but on others, the spots are very light or nonexistent.

How the Asian Lady Beetle Was Introduced to the United States

This Ladybug species was purposely introduced into the U.S. from Asia in the latter half of the 1900s by the U.S. Department of Agriculture (USDA) to control agricultural pests, such as aphids and scale insects, especially for crops of pecans and apples.

The USDA released the Asian Lady Beetles in Georgia, South Carolina, Louisiana, Mississippi, California, Washington, Pennsylvania, Connecticut and Maryland, and since then it has migrated so that it is now found throughout most of the U.S. In addition to this intentional introduction, the beetles have been accidentally introduced to the U.S. on freighters, which probably caused or increased its presence across the country.

Since their purposeful introduction, however, the not-so-beneficial aspects of this species of Ladybug have come to light. Like box elder bugs and stink bugs, Asian Lady Beetles will crawl into cracks and crevices of the home seeking warmth. They come in through the eaves, siding, or even the foundation to overwinter between the walls.

Once inside, they will crawl or fly around rooms, and land on windows, walls, and furniture. While this is annoying, except for the few problems listed below, these beetles are pretty much just a simple nuisance to most people and pets. They do not feed or reproduce indoors, nor do they attack buildings, furniture or fabrics. If smashed or disturbed they do release a pungent bitter smelling odor and leave a slimy yellow stain.

Yes, Asian Lady Beetles have been known to bite, or more specifically, ‘pinch’ exposed skin with their chewing mouthparts. This can happen upon landing on a human or pet, and if they are handled or feel threatened. The bite has been described as a pinprick and is rarely serious.

They do not carry or transmit diseases; however there have been instances and studies suggesting Asian Lady Beetles can trigger allergic reactions. Reactions are caused when a person is around a large infestation, or by touching them and subsequently touching one’s eyes. Documented allergic reactions range from conjunctivitis (pink eye), cough, hay fever, hives and triggering asthma. It is important to wash your hands if in contact with Asian Lady Beetles and to avoid touching your eyes (and face) if you have made contact.

Asian Lady Beetles have become a more serious concern for the wine industry in Eastern and Midwestern U.S. and Ontario, Canada. In the fall they take shelter in wine grape clusters in vineyards. If any beetles are accidently processed with the grapes their harsh, their acrid odor can taint the wine’s flavor.

Since the Asian Lady Beetle overwinters indoors, once they find a favorite overwintering site, they can produce an attractant pheromone that stimulates the beetles to return to the same location year after year. Here are some tips

The best way to control Asian Lady Beetles in your home is through pest-proofing measures to keep them from entering. These include sealing gaps and cracks around windows, doors, chimneys, utility wires and pipes, and vents, as well as in siding, eaves, and the foundation. It also is important to be sure that all doors and windows are tightly fitted, and to repair or replace damaged screens.

If you are serious about how to get rid of Asian Lady Beetles effectively, seek professional pest control help to treat the perimeter of your home and building with a residual spray in the spring and fall. A licensed pest management technician will also help uncover the root problem and use integrated pest management techniques to help rid you of the pests, monitor for them, and most importantly, and prevent them from returning.

Once inside you can get rid of them by vacuuming or sweeping. Whatever you do don’t squash them! They secrete a terrible odor and yellowish fluid if disturbed. This fluid can stain walls, furniture, and other surfaces.

Vacuuming with a HEPA filter is the most effective. Using the attachment tools vacuum up the Lady Beetles. Most of them will survive being vacuumed up. If you have a garden, you can transfer them to your garden to help get rid of aphids.  If you prefer to get rid of them all together, place the vacuum bag into a sealed plastic bag or you just burn the bag.

Sweeping is also an option. Using a broom, gently sweep the insects into a dustpan or other container and put them outdoors. Again if you wish to completely get rid of them put them in a sealed plastic bag or burn them in a paper bag.

Light traps are a way to trap Ladybugs, but this method will kill them. These traps, which can be found in home improvement stores, use light and pheromones to lure in Asian beetles, and a water solution drowns them.

The trap includes a funnel top, which is designed to channel the bugs into a plastic jar base below. The light and the pheromones attract the ladybirds to the funnel, where they’ll slide down into the jar and drown. The efficacy of these traps have been questioned by professionals, so do your research before you buy.

If you’re not too keen on the idea of killing ladybugs and the other methods above are not working, you have one alternative: wait it out. Ladybugs are only looking for a place to hibernate for the winter. They won’t damage your home or reproduce. They just want shelter. And when the weather gets warmer, they’ll head right back to the great outdoors – where they belong.

After these bugs do leave your home, make sure that you take preventive measures to keep them from coming back next year. Seal entryways; lay down diatomaceous earth, plant mums and maybe even go as far as placing a  cute Ladybug house in your yard.

Prevention is the key with ladybugs because once they’re established in your home; it’s difficult to get them out. ACLM