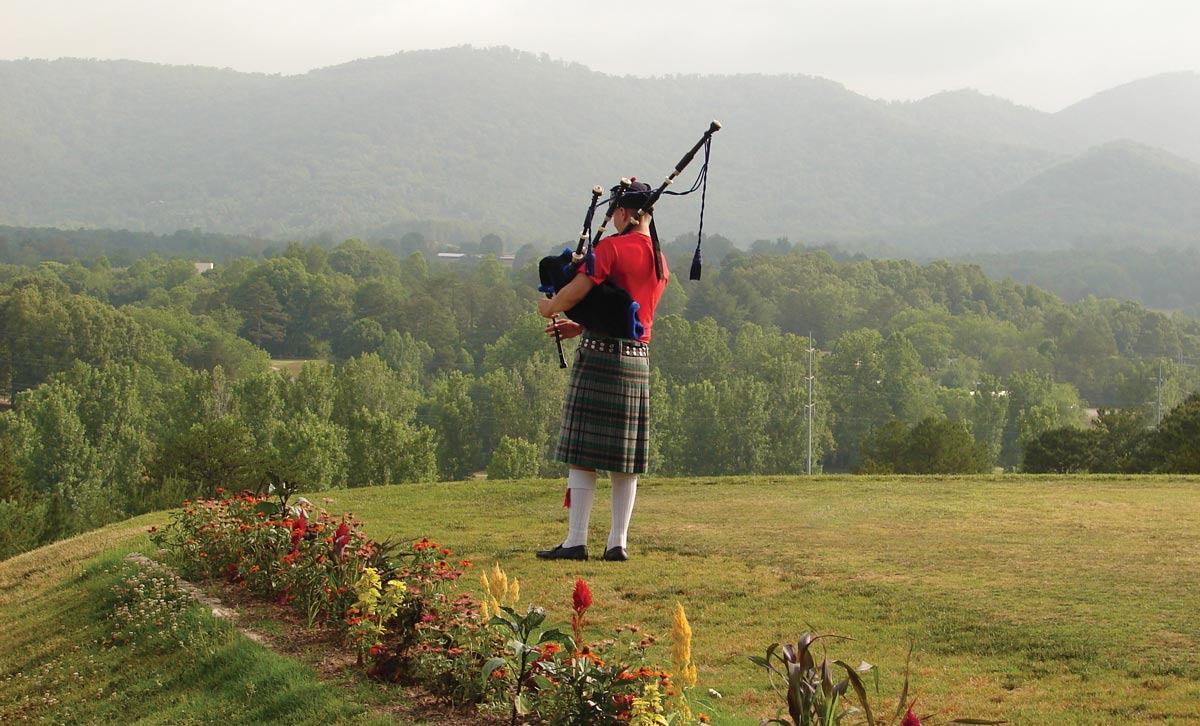 The Hills in the Highlands are Bonnie!

The 11th season of the Blairsville Scottish Festival kicks off June 13-15, 2014. The heritage of the early Scots, who settled in Union County during the Georgia Land Lottery in 1832 is revisited with Highland clans, Scottish folk dances and music, pageantry, bagpipes, bridies (meat pie), sgain dubhs (ceremonial knives), Ceilidhs (parties), Highland Games and a Kilted Golf Classic.

Jim McAfee, one of the founders of the now annual celebration tells that the mountains, hills, fields and winter rains made the early settlers feel like home in Scotland. “If your history includes Georgia, North and South Carolina, and Tennessee, you’ll most likely find your Scottish ancestors.” McAfee further notes that 50 percent of the Union County phone book contains Scottish/Irish surnames with almost 400 beginning Mc or Mac. “The early settlers of Union County included many Scottish families with names such as Duncan, Gillespie, Henderson, Wallace and Gordon,” he points out.

In the center of mountain-town Blairsville lies the Butternut Creek Golf Course, where Friday June 13th the Kilted Golf Classic will find the “goilfeirs” registering at 10 am with tee off at 11 am Those who wear kilts will receive discounts, as well as many fabulous prizes awarded for play. The fee is $75 per player, bring your foursome or be grouped in a team and meet new Scots.

Friday night provides family party time with the Ceilidh Block Party on the Square (Ceilidh is the Scottish word for party), 6-9 pm at the newly-renovated Downtown Square. The party space includes the Season’s Inn Plaza and the Historic Courthouse. Here you’ll find an indoor concert at the courthouse, outdoor music, and other Scottish-style revelry in the plaza.

Stores and restaurants will be open for treats and Scottish fare. You’re invited to party like a Scot and encouraged to wear Scottish attire. Entertainment throughout the weekend includes music: The Blarney Girls, Colin Grant-Adams, Appalachian Pipe and Drums, Solo Pipers, Scottish comedian, Bob Valentine; Uncle Hamish and the HooliGans, The Oatcakes and the Keltic Kudzus. And dance by: Royal Scottish Country Dance Society (Atlanta Branch), and the Glencoe Highland Dancers. A Solo Piper will play “Flowers of the Forest” at the Saturday Massed Bands event in for of friends and family who have passed away.

The festival gates open Saturday the 14th, at 8 am, where the festivities move to Meeks Park, just beyond town. The Nottely River, which runs through the center of Meeks Park, offers outstanding photo opportunities.

Registration for the Kilted Mile Race begins at 8:30 am at the Clan Challenge Tent. Race starts at 10 am. Lads and lassies must be attired in kilts or tartans—or a BSF tee shirt. Prizes are awarded for all age groups.

At 10:45 am, the Mini Cooper Car Parade winds its way through Meeks Park, where the cars will be displayed on a field of green.

Each year—and 2014 is no exception, a priority of the festival is children’s activities held at the Children’s Field, both Saturday and Sunday. Planned events: Gaelic train rides, Thistle Dhu miniature golf, Edinburgh Bouncy Castle, face-painting and passports to the clans, where they visit each clan tent to learn of their history. Also, afternoons offer Scottish Athletic competition—children’s style: toss the caber, heave the stone, and toss the sheaf, following trained volunteer instruction. Parents are required to stay and cheer-on the young athletes.

All ages will enjoy the animals of the highlands–Border Collies and sheep herding, the Gordon Setters, Highland Cattle, and the falcons and hawks.

The opening ceremony at noon Saturday features massed pipe and drum bands, with tartans flying, for a breathtaking spectacle. The Parade of Tartans, with more than 35 proud clans, will march—and later display in individual tents. The Scott Clan is the honored clan for 2014.

There will be workshops on the harp, fiddle, bagpipe and dance. Scottish food, including haggis, bridies, scones, and American fare, is available, with scores of vendors displaying their wares.

The Southeastern Scottish Amateur Athletic Association sanctions the Blairsville Highland Games. The open fields are encircled by the clan tents that host the games. Classes Super A, A, B, and Masters for both men and women will compete Saturday and Sunday in seven different events: The Open Stone Throw, a 21.8 lb. stone is thrown for distance like a discus; The Hammer Toss of 56 and 28 lb. weights throw for distance; The Sheaf Toss, a 16 lb. bale of hay is tossed over a bar for height. The Caber Toss is one of the most popular events, originating from the tossing of fallen trees in the highland forests of Scotland.

Action packed afternoons include a Clan-Tug-of War and other clan competitions. Historical reenactments by the Clan Non Con portray the early Scottish settlers of Georgia, ax throwing, archery, Falconry and Flying Hawks, Bladesmithing and forging, the Women’s Haggis Hurl, and the Bonniest Knees and Boney-est Knees all provide hours of family fun.

Sunday morning at 9 am a special worship service: The Kirkin’ of the Tartans celebrates the pageantry of the highlands. The Parade of Tartans precedes the ceremony, paying tribute to the Scottish ancestors who struggled to preserve their liberty and religious freedoms. The Reverend K. Travis Adams leads the homily, the prayer of the saints of the Kirk, the Kirkin’ of the Tartans, and the Celtic Benediction.

All this pageantry is a bargain at $10 per day or two days for $15, children 12 and under are free. The admission fee includes parking—and handicapped parking is available. Shuttles are available that run from the general parking lots and throughout Meeks Park.

The Blairsville Scottish Festival and Highland Games have been on the Southeastern Tourism Society’s top 20 events for six of the last seven years. BSFHG is a no-profit 501 © (3) with the mission of bringing tourism to Union County.