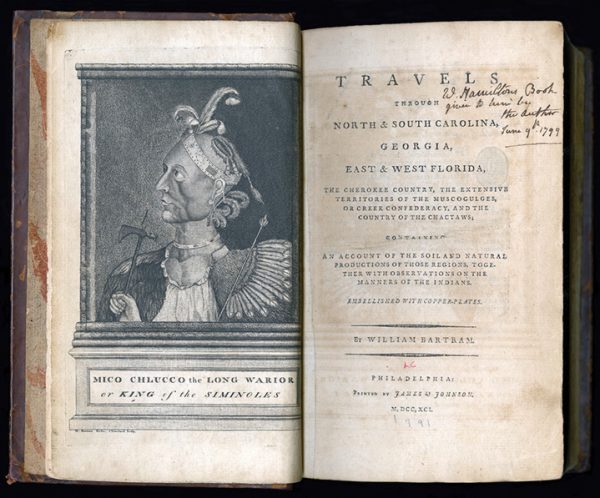 What does botany and ornithology have to do with the history of the “Indians” of these Southern United States?

William Bartram 1739-1823 was born in Pennsylvania and like his father John, had a keen interest in discovering the new realms of the southern lands from the tropical forest of Florida through Georgia Territory which included what later became Alabama. His travels are well documented and by the mere magnificence of his verbiage and language could capture the reader’s interest with just one paragraph. His original documentation of his “Travels” are written in precise English which is difficult for the common reader to decipher with the letter “s” being written as “f”. His works were so well thought of not just for his writings about plants and animals but for his description of the Indians being the first “naturalist” to venture into the lands of the south. More modern versions of his works are more easily read.

It is surely his fearlessness that endeared him to the American Indians he encountered. He had been invited by the Superintendent of Indian Affairs, John Stuart, to accompany his survey party into new land sessions of the south. Stuart was one of the few white men that the Indians found trustworthy. He had emigrated from Scotland to South Carolina, which at the time was still a British Colony.

Bartram’s description of the Indians he met were used often by other writers concerned with the traits and aspects of the Indians of the South. It was said that he had encountered a “Siminole” who was bent on killing every white man he came upon. But when the “Siminole” met Bartram, he was disarmed by this charming man’s friendliness. So it was, that Bartram, accompanied the surveyors to the area of Augusta when the Creeks and Cherokees had given up 674k acres of land. He collected seeds from new plants and trees that were thereafter documented and certified. In doing so, he also documented landmarks, tribes, animals, and birds while telling his tales of escaping bears, wolves, snakes, alligators and more.

His journeys and tales inspired many of the romantic 18th century writers of the day from Samuel Taylor Coleridge to William Wordsworth. The Bartram Gardens in Philadelphia are a tribute to this family. In addition to writing about the natural history of plants and his travelogue, he wrote in depth accounts of his encounters with the Indians speaking on his observations of their manners in such terms as to disallow that he wrote these works at all since they romanticize his encounters. He spoke of not only what plants these people grew but their dress, physical characteristics, government, social organization and the love they had for the land.

Aside from the books involved with his travels, he wrote many articles and journals that have been complied into “Observations on the Creek and Cherokee Indians” in a book edited by Waselkove and Braund. It is based on a series of questions asked of Bartram by a Philadelphia physician Benjamin Smith Barton. The doctor was most interested in whether the Indian’s skin color was the same at birth as it was when they became adults? Were any of them were born spotted, having had a mix of parentage? Was their skin color due to painting themselves with the pigments of plants? Bartram must have thought these questions quite insane. He tells what he surmised of the “Chactaw, Crick, Chicasaw, and Siminole”. Then he separates the description of the “Cherokes” by saying “They are the largest race of men I ever saw, and equally comely (attractive)” with skin that has an olive cast. Perhaps thought to be because they are mostly mixed bloods. “The women are tall, slim, of graceful figure” with a complexion that is fair. He compared them to their “Crick” tribe as being much taller and lighter skinned.

He continued by saying he never heard of any spotted, speckled, or piebald people among the Indians. When asked if the women were the picture of misery and oppression, Bartram was quick to tell the good doctor, it was quite the opposite, since the “Cricks and Cherokes” are both matrilineal tribes. Other questions included games, religion, and governmental practices.  ACLM