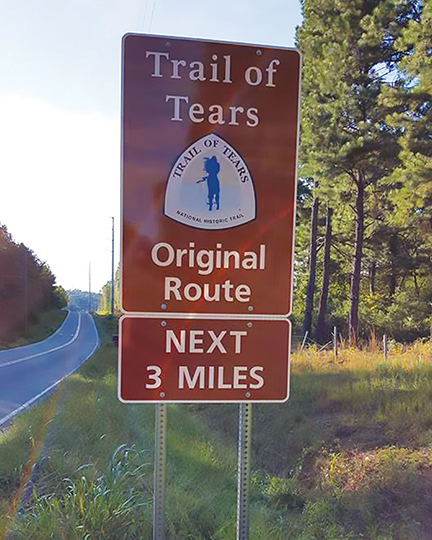 The National Trail of Tears Association, TOTA, was founded in Arkansas in 1993 and is sponsored in partnership with the National Park Service out of Santa Fe New Mexico http://www.nps.gov/trte. Since then nine state chapters were founded to organize efforts in the preservation and education of the public as to the history of the Cherokees. These are Alabama, Arkansas, Georgia, Illinois, Kentucky, Missouri, North Carolina, Oklahoma, and Tennessee.

Our objective is to Preserve, Interpret, and Promote the history and heritage in Georgia of those who came before us. The Georgia Chapter came about in 1996. We work with local historical societies and other organizations to verify and document the events of the removal and to locate any surviving and viable sites related to the heritage of the Cherokees and Creeks of what was known as the Cherokee Nation of Georgia. It included portions of Tennessee, North Carolina, Alabama, and Georgia when General George Washington and Henry Knox declared ten million acres in Georgia Territory for the Cherokees and twenty million acres for the Muscogee (Creeks) after the Revolutionary War.

Each chapter has many researchers, teachers, retirees, and historians, as well as just ordinary people, who love history and are working to locate the records within the 12 counties involved with the removal of the five “civilized” tribes.

Those are the Cherokee, Muscogee (Creek), Chickasaw, Choctaw, and Seminole tribal nations. Each state addresses the specific issues that evolved within their state. Georgia, in particular, is considered to be the homeland, although was not included on the original Trail of Tears maps formulated in the 1980’s. It was the Georgia Chapter’s goal to get this changed and even before it actually happened, members had begun working on establishing the routes through Georgia and the missing portions not included in that original map.

From July 2006-March 2009 Congressman Zach Wamp of Tennessee directed the National Park Service to make a recommendation to expand the Trail of Tears to include not just the routes of removal but the ancestral homelands. The Omnibus Public Land Management Act HR146 was submitted, passed, and sign into law March 30, 2009. The Trail of Tears now includes North Carolina, Alabama, and Georgia in addition to the Benge and Bell route arteries missing from the original research materials.

Since becoming an official arm of the National Trail of Tears Association we have worked hard to document, certify, and map out sites that were important to Cherokees and Muscogee Nations East. We work with educational facilities that include university archaeology, history, and ethnological students and classes. We work with dendrochronologists, spend hours in state and national archives researching records and in local libraries finding those hidden treasurers stuffed away in file drawers and long forgotten.

In the years that I have written articles to tell the public about this history and heritage in just Georgia, I have only scratched the surface. Currently we have seventeen sites that have been documented, certified, and signed. Those brown and white Trail of Tears signs you see along the roads throughout North Georgia have been strategically placed to remind you that there is a history that came long before the War between the States.

The pandemic recently put a crimp in our efforts and we have no less than seven more sites to sign, document, and tell everyone what happened there. The major problem is that most of us are aging out of being able to continue to do what still needs to be done. I myself have spent 22 years with the Georgia Chapter and am serving my second term as the chapter president. I’m only one of a dozen dedicated research and volunteer members of this association. We need people who are interested in working in their county to form a committee and do the research that still needs to be done. We need workers in the field to pick up and carry on after we are gone. My grandmother was a wise woman and always told us to bloom where we are planted and to have a goal in life so that someone would know you had been there.

If you are interested in being involved, please let me know, preshist138@gmail.com.

The association doesn’t require you to be American Indian, just have the heart to see that the heritage doesn’t die and our grandchildren know nothing of those who came before. ACLM

Research and Field Work Volunteers are needed to preserve this history so others may learn. For more info please contact Leslie at: preshist138@gmail.com.