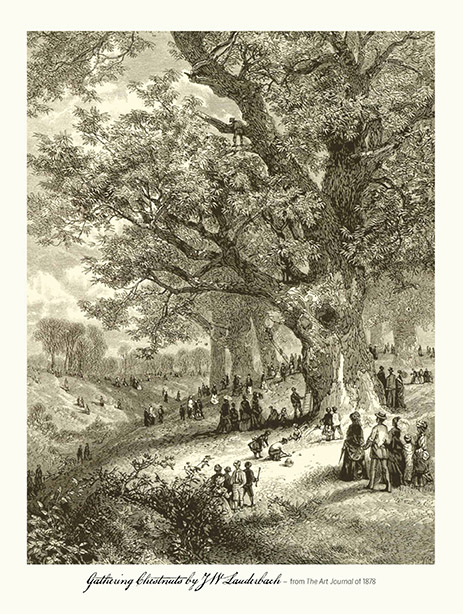 Native Americans had long utilized the nuts of Chestnut trees in trade and as payment for items they could purchase from trading posts all over the Eastern lands. Gilmer County Records for the Ellington’s Store indicate the use of bushels of Chestnuts as payment.

The nuts are housed in a spiny bur that inspired poets to write poems and historians to write stories of Appalachian life singing the praise of this Sequoyah-sized tree.

Under a spreading chestnut-tree

The smith, a mighty man is he,

With large and sinewy hands,

And the muscles of his brawny arms

Are strong as iron bands.

Chestnut trees were used for their hardwood timber and their nuts. Yet their blossoms in springtime, with a variety of colorful flowers resembling those of the bottlebrush buckeye (which are no relation to the beech tree offspring), were stunning. Chestnut trees were once prolific in these mountains until the blight of 1900 which affected many hardwoods. The blight was introduced accidentally by imported Japanese tree stock, causing an immediate and widespread die-off of the once plentiful Chestnut tree. Cankers raised on the bark of the tree caused the bark to split, killing the tree.

After the blight, it appeared that some of the trees had re-sprouted and were growing back, however they proved to be sterile, and not able to produce nuts/seeds.

Small groves of chestnuts have recently been found in Alabama, Georgia, and Tennessee. Some have been found as far north as Michigan, so perhaps regeneration efforts of the Chestnuts are beginning to be effective.

Scientists have been working to create a resistant hybrid Chestnut tree that would retain the characteristics of the American Chestnut. The Eastern Band of Cherokee Indians has partnered with the American Chestnut Foundation (ACF) to plant American Chestnut trees in a new orchard located on Jenkins Creek on the EBCI Reservation in North Carolina. Thursday, Oct. 21, 2021, marked the first step of getting trees in the ground. This is part of a revitalization effort to save a species that is ‘functionally extinct’. To help save these trees, visit acf.org   ACLM