History of Indian Georgia – Part One 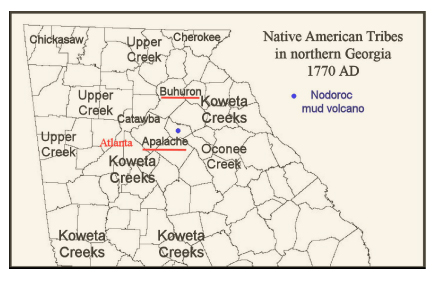 The lands were pristine – minus the clutter of telephone and technological poles, minus roads and hilltops flattened to allow for commerce some 300 years ago in North Georgia. The Muscogee Creeks and Cherokees governed the land. Wood buffalo roamed through the fields of tall grasses. Trails made by deer, bear, and cougar lead into the hills. The unregulated waters of the three rivers teamed with fish. It was a good land. It was a green peaceful valley between the hills.

The history of the American Indians is scattered amongst several authors’ books, most all by white militiamen or literate pioneers to the area. On these pages it is hoped to convey and make the historical facts come alive, as they have been found from years of researching dozen of authors and through the Georgia state and National archives for primary source documentation.

The area of the Southern Blue Ridge Mountains is one of the oldest inhabited areas of Georgia with a history going back beyond the Mississippian Indian Cultures. Originally for centuries it was part of a vast misnomer of Indian culture and heritage. Once the Spanish and Europeans invaded the lands of Georgia from about 1540–1738 there was a loss exceeding 95% of the indigenous populations from diseases such as smallpox, enslavement and battles. There were twenty-one different tribal factions living across what became the state of Georgia.

The lands of Georgia were originally claimed by colonist Oglethorpe for Britain and ran from the Atlantic Ocean to the Mississippi River and beyond. The intruders pushed ever westward into Georgia displacing various tribes of indigenous peoples as they went. In the early 1700’s the English made treaties with many of the tribes to supply them with trade goods and metal tools causing a debt, which the British collected in furs and deer hides which never seemed to be enough. This practice soon depleted Georgia of her herds of wood buffalo and white-tailed deer. The British then began making their collections in the form of ceded lands. The American Indians knew nothing of land ownership. Their feelings were that their God had lent the lands to tend and care for all time.

Around the time of the American Revolution in 1773 the Cherokees relinquished their lands near the coastlines and moved inland, displacing indigenous tribes as they went. The Muscogee Creek tribes had controlled most of Georgia since the 16th century. They were removed to current day Alabama and then further to Indian Territory of Arkansas and Oklahoma by 1827.

The Cherokees continually made concessions to the English and through efforts of acculturation tried to adopt many of the colonists white ways in order to exist in the lands of Georgia together as a peaceful peoples. Both the new Americans and British colonizers were rapidly pioneering the lands, always wanting more.

The American Revolutionary War (1776-1785) brought many battles to Georgia’s highly populated coastal shore. It became the only state of the thirteen colonies to be totally taken over by the British. The Cherokee had sided with the British in hopes of staving the onslaught of the continuous colonization by the pioneers.

The British appointed one chief to speak for all the Cherokees at any given time. They did not comprehend the government of the Cherokees, which involved many “chiefs” over the one hundred or more townships. The term was wrongly used to identify their leaders of these townships; they were more like modern day mayors. The Cherokees decided they would choose their own representative to stand up for them after council meetings were held. The British still insisted that their chosen chief would make decisions for all Cherokees. This did not set well with the Cherokees and thus began some serious infighting amongst the different factions across the Cherokee Nation.

In 1780 Colonel John Sevier (1745-1815) entered into Georgia to begin his “heroic” battles with the Indians. He was adamant that they needed to be eradicated for their compliance with the British. Some thirty-five attacks are documented with few mentioned by location. His rampages across the mountains left many an Indian town and village in ashes. Among  these was the Battle of Ellijay fought on the shores of the Coosawatee River near the corner of Highway 282 and South Main Street. The Hiawassee River battles another, where the towns of Chestoee and Hiawassee were burned to the ground. Yet another was the Battle of Hightower (a corruption of the word Etowah).
The year 1790 saw President George Washington declaring the Cherokee Nation a sovereign country and gives the Cherokees the right to govern themselves. This determination was short lived, as Governor Edward Telfair of Georgia wanted no foreign nation within his state. He and his successors spent many years working towards evicting the American Indians from Georgia. It was an issue of States Rights, one that could have seen the south involved in a Civil War long before the 1860’s.

By 1786 the Cherokee had a model government. It followed many of the precedents of the fledgling government of the American Colonies. By 1825 the capitol town of Echota was moved to New Echota on the shores of the Oostanaula River to the west of Ellijay in Gordon County now. Located there were the printing offices for the Phoenix newspaper a dual language newspaper written in Cherokee and English.