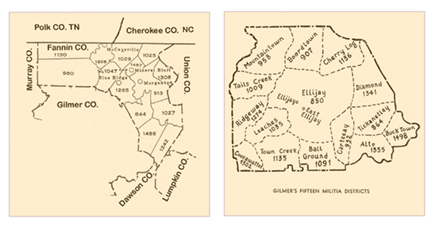 Georgia Territory/Province divided out districts from 1733-1879. The idea of having militia districts was to form a buffer between the Spanish settlements to the South and the British colonies to the north. There was always a rumor of war with other nations but also the Indians, bandits, pirates and France. After the Revolutionary War, the division of the Georgia Territory that once expanded to the Mississippi River, involved Georgia doing a survey of all the Indian Territories of the Creeks and Cherokees. Those counties already in existence added more counties in the Indian lands.

Georgia Militia Districts (GMD) were formed in each of the counties. There was an elected captain for each district who enrolled those able-bodied armed males between the ages of 16 and 50 within his district. “Muster Days” were originally intended for military drilling, but eventually evolved to little more than social events. The intent was to protect the residents against invasions of wild animals or wild Indians. It was a good way to meet neighbors and keep up with the latest information about their district.

As new counties were developed in the state, they were divided out into militia districts. In 1804, each Militia District was assigned a number and these numbers remain in use today as voter districts. The smaller the number, the earlier the district was formed. Census records usually indicate what Militia District is involved as to where these families lived. Although parts of the Militia District system were abandoned during the Civil War, most of the district boundaries remained intact to serve as political subdivisions and voting precincts.

Ministers were exempt from service. Campaigns were held against the Indians and involved gathering various men from collective districts to do battle. During the Civil War, brigades of GMD were utilized to gather forces for battle. Many books have been written detailing the history of these units and their evolution into divisions utilized during various war efforts.

Pictured above are the Gilmer County and Fannin County GMD maps. There are maps for all counties in Georgia on the Internet.  ACLM