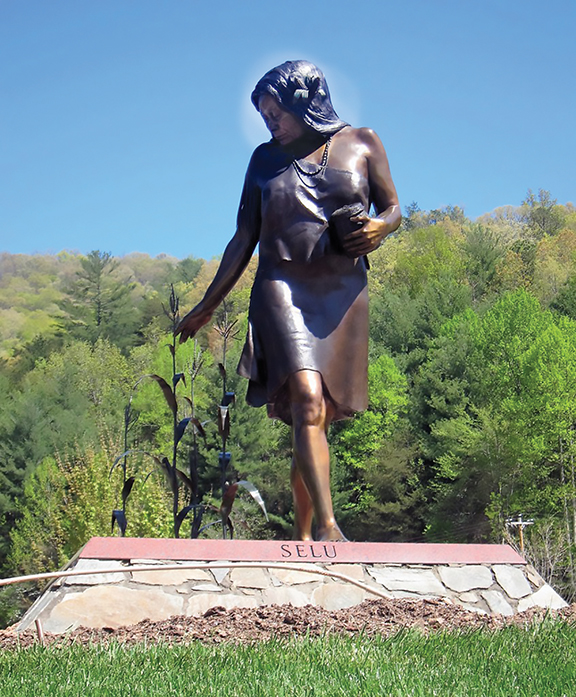 The Cherokee Territory of Georgia instituted a Studying the History of Corn and the Indians of the Southeastern United States where you will find a number of stories. One included here, is that at one time there were 14 different varieties of corn as we know it today. The Indians ate them all and traded with the pioneers trying to teach them how to use this product.

European pioneers couldn’t comprehend why the natives didn’t use more of the vast lands to grow products or raise livestock. They were thinking more in terms of getting rich, rather than using what was grown to feed their own families.

Once the lands were confiscated from the southern tribes causing the removal to the west, intruders began planting hundreds of acres at a time. Not comprehending that the Indians only used what was needed without building up great stores, production got out of hand and demand wasn’t as necessary as the farmers originally thought. Every farmer was growing more than was needed.

Most of North Georgia’s history related to growing corn seems to wrap around the making of moonshine. Because the high volume of production proved to be useless and they couldn’t sell the corn, most farmers had to return to their Scotch-Irish roots and the making of whiskey or as we came to know it, “moonshine.”

Cherokees have a legend that the first woman was named “Selu” meaning corn. The “three sisters’ story is often told as how Selu planted the corn and the women, who were the farmers planted beans and squash. The corn stalk supported the beans and the squash provided much needed shade to keep the corn stalk moist. The three sisters were harvested and made a tasty vegetable soup.

But that wasn’t the only use for the whole corn plants. The husks were often dried and then crinkled to make them pliable and soft to be used to make mattresses for the rope beds.

Corncobs also had a couple of uses. One was for “toilet paper,” a bit rough but it worked. Paper was in short supply, so although you hear of catalogs being used, more often real paper was considered to be a premium item and was bleached out and used for writing letters or doing homework for school. In addition to using the cob for toilet duty – hay, husk, hemp, leaves and moss could also be used to stuff furniture and mattresses.

Another use for cobs was to make yeast or baking powder; grinding or shredding the cob to a powder similar to baking soda. Or it could be steeped and fermented to make yeast. Cobs were also used to feed the livestock. And oh yes, let’s not forget that old corncob pipe.

Husks and corncobs were also used to make dolls for the young girls. Green husks could also served as a sort of tin foil to wrap foods in when cooking them over an open fire. Slippers or sandals could also be made from the husks striped or rolled and woven together. Corn stalks could be hollowed out and used to store sugars, salts or medicines.

Pioneer families would dry their corn and store it in sacks. Drying would make it last much longer than the few weeks before it would mold (or ferment) and had to be eaten. They ground it using a pestle and mortar, much as the Indians had done throughout their history.

When ready to be cooked, the dried corn was soaked in lye to loosen the outer casing. This resulted in hominy, a corn seed that swelled to sometimes three times its original size. This practice is still done by indigenous peoples.

Cornmeal was the basic bread making flour long before wheat. Corn mash could be mixed up and wrapped with corn leaves, then roasted in the dying embers of the fire. Corn mash could also be mixed with fruits and berries in season for tasty dumplings, boiled in water or roasted on the fire.

Early farmers may have found out they needed to pay more attention to how the Indians stored the corn. Corn cribs, a small shed had to be open slatted in order to keep the air flowing through it or it would create methane gas and explode.   ACLM