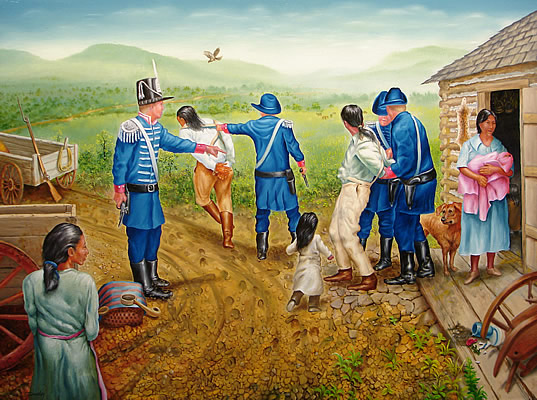 The Forming of The Georgia Guard

Georgia’s governors had grown paranoid over what was going on inside the Cherokee Nation of Georgia. Prior to the discovery of gold, the US Government had installed Federal Troops to work with The Cherokee Light Guard in protecting the Nation’s properties. The original treaties allowed for the Cherokees to retain their lands and mineral rights, but once gold was discovered in 1827 on Cherokee Nation land, the infiltration of gold seekers ran rampant. The Cherokee Light Guard headed up by Stand Waite, began been attacking all the intruders coming into the Cherokee Nation who did not have permission from the tribe to be there. The Light Guard were burning these trespassers’ crops and houses and stealing their livestock. There were no controls other than to institute measures for expelling these trespassers. As Congress passed the Indian Removal act of 1830, Georgia’s government formed a new Guard, thus replacing the Cherokees’ Light Guard and expelling the Federal Troops from the state, leaving the Cherokee nation without an advocate.

The Guard consisted of 60 militia men, who were often referred to as the Georgia Guard (not to be confused with the Georgia Guard renewed during the Civil War) or just the term “militia” in records and letters between representatives of the Cherokee Nation and Georgia’s government. The Georgia Guard were ineffective at maintaining the peace between the Cherokees and the literally thousands of men coming from Tennessee and North Carolina into the Nation with gold fever.

Indian Agent Colonel Hugh Lawson Montgomery reported estimations of nearly four thousand white trespassers on Cherokee land by mid-1831. Within six months, the number of white trespassers seeking gold climbed to over seven thousand. Laws against these trespassing squatters’ intrusions were virtually unenforceable. Agents and Guardsmen could arrest a few of them, but there was no entity to enforce the penalties or fines. The trespassers were escorted from the lands, only to return two-fold the next day. In addition to gold, these interlopers were stealing the Cherokee’s horses and livestock.

The paperwork battles for removal of the Cherokee intensified. Georgia was prompt to invoke measures to dissolve the sovereignty of the Nation and lay claim to the lands that contained the gold. Dozens of legends enveloped the Nation as they were thought to have hidden vast amounts of gold wealth and would one day return to claim it. Hundreds of maps appeared over successive decades telling of these vast hordes and where they might be found. These maps sold for a hefty price and some of them are still circulating today. Legends contend that most of the mixed-bloods that had been removed west, returned under cover of darkness to retrieve the family treasures.

The drama intensified as there were protagonists on both sides of the Georgia government land grab and Indian removal issue. The taking of Cherokee lands involved an assortment of Indian agents, guardsmen, tradesmen, and missionaries and of course dozens of Cherokee Leaders trying to protect their land. Settlers were greatly divided on the issue of removal. Families that had lived in the Cherokee Nation before the Georgia Gold Rush tended to be more supportive of the Cherokee.

One reason for the strong bond was the acceptance of them by the tribe. The Cherokee had invited struggling early settlers into the Nation in their time of need, teaching them various trades such as wagon making and blacksmithing. However, in general, Georgians viewed the Cherokee as only somewhat higher on the social level than slaves, but not much.