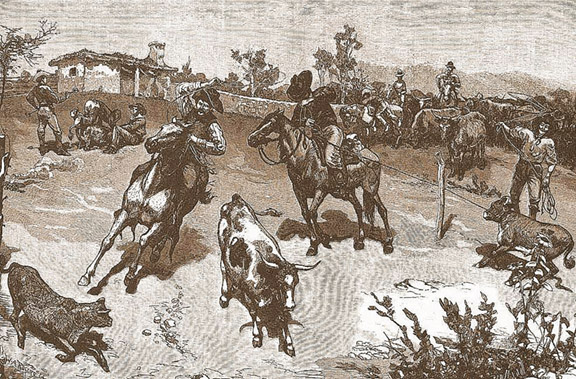 America’s Wild Frontier. Today, the old west to most of us means the southwestern states where cowboys roamed the range. In Georgia the “frontier” was a demarcation between the civilized settlements of the east, and the land considered wilderness beyond that. These lands were uncharted, in most cases, never having known the plow or the ax. Dotted with quickly built shacks to protect adventurers from the elements; these shacks became the first western communities.

The original stories told of the old western frontier began in Georgia and other southeastern states. Unfortunately this history was left to be written by politicians rather than adventurous storywriters. Theodore Roosevelt wrote in his book The Winning of the West, that Georgia is one of the “weakest and most lawless of the original thirteen states.” Amid the volumes of legal claims and criminal records lie the stories gleaned from these lackluster descriptions with few details. We can only surmise what transpired in the hastily documented events.

Those adventurers with the desire to sustain each other in the belief that someday “this” place will become a civilized town or city, formed the first frontier settlements. However, word of mouth spread quickly to those who felt cooped up in the citified realms. The promise of rich lands (in more ways than one) further south and west was enough for these restless nomads to move out along well-trodden migratory paths often referred to a “pig-trails.”

Lawlessness was prevalent and in most cases rampant. The Georgia Commissioners at the treaty of Colerain in Camden County Georgia (1796) complained of a loss of 825 horses, 1159 cattle, 495 hog and 115 houses burned. They blamed the Indians, who indeed felt a great need for horses; however, they were blamed for much of the stealing when in fact it was the outlaw whites doing the majority of it.

Homicide on the frontier was considered more of a misdemeanor offense compared to horse stealing. The thief was considered a negative value as compared to the horse being a necessity and having a pertinent positive value. Justice did not pursue the murderer as often as it did the thief. Once a settlement became permanent and developed commerce, the settlers began to demand protection for their investments. Laws would be written and someone, usually a sheriff, would be first appointed, and then elected to make everyone adhere to these laws. As long as the local citizenry was at peace, little care was given as to where the culprits went as long as it wasn’t in their settlement.

Miners for the most part were a rowdy bunch of ruffians and as a rule, considered to be greedy. Their life was one of monotonous pursuit of the next big bonanza of “color.” Their feeling was that the land, regardless of whose ownership, was theirs to investigate and explore to success of a find. The legality of the find was inconsequential to them. It belonged to them regardless of who owned the property; they dug it, and found it, and they fought to keep it. On the frontier, the lands of Georgia had been surveyed and allotted; the miner may have owned that land, at least on paper. It may have been labeled as a gold lot but whether or not there was any mineral content on the land was often debatable.