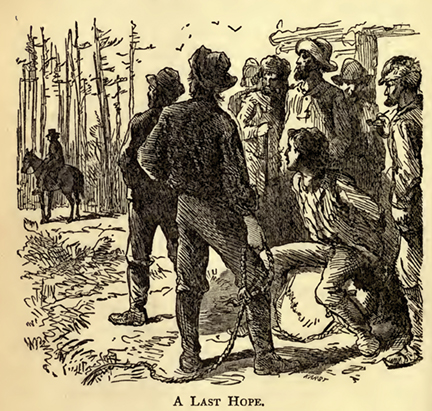 Horse Thieves, Pettifoggers, Regulators and Vigilantes. Towns sprung up across the South East Frontier around the possibility of gold mine finds. These towns consisted of a store, a post office, and of course, the saloon. Some “dandy” lawyer would find his way west in search of the prestige that comes from running for the office of sheriff or mayor, serving sometimes in both capacities as well as being legal counselor.

The “pettifogger” as they were referred to was someone who knew just enough about the law to employ dubious practices to his benefit. He was often full of deceit and trickery, pocketing the fines levied upon the defendant or offender, and then charging them his legal fee on top of it the town fine. The “pettifoggers” rambled from town to village, going wherever the action seemed best, and henceforth, people began to distrust lawyers.

This type of thieving had no ethnic, political or national boundaries. The Georgia Colonial records show dozens of cases of all sorts of thievery being propitiated upon the citizens from the coastal colony to the Georgia Frontier and beyond. These thefts could be whatever sort of goods one had, from clothing to the horse complete with bridal and saddle. Most often it was livestock or foodstuffs and travelers were regularly robbed of whatever goods they had. The frontier farms, whether owned by whites or Indians, were targeted often. Those traveling along the Federal Road were frequently accosted as they took their stock to markets in Tennessee and beyond, but more so after they collected the money from the sale. Thievery was not always necessary to survive; it was just another occupation or way of life.

Horses were the most prevalent theft along the frontier. Used as pack animals and the major form of transportation, horses were a must for survival in this inhospitable land. Indian agencies required items such as pots, pans, knives and rifles for their own use and to be brought in for trade with the Indians who furnished the agency with goods that were wanted back east: furs and hand made leather articles such as horse tack.

Traveling in groups afforded no protection on the free range. Thieves would often steal the horses from the nightly encampment and ransack the wagons. Many incidents occurred in broad daylight with as much cunning as an actor upon a stage. One such incident recorded near Milledgeville Georgia was of a white man who questioned the abilities of a Creek Indian who owned two horses. They decided to race the two horses to test their strength. One man mounted one horse while the Creek man road the other. They raced headlong down the main street of Milledgeville. When they reached the predetermined finish line the white man kept on riding and disappeared into the hills.

In the early 1800’s, Creek Indian agent Benjamin Hawkins devised a method of branding horses with a different letter for each state of North and South Carolinas, Tennessee and Georgia from the coastal territories to the west, bordering the Mississippi River. He hoped that such a system could help identify the origins of horses should they show up in Creek county. This method would go a long way towards settling disputes of ownership when the horses were retrieved. However the method was not readily accepted and implemented at that time and horse stealing continued to run rampant.

Counterfeiting and horse stealing were often linked. Horse thieves organized themselves into gangs, stealing horses in one area and disposing of them hundreds of miles away, preferably across state lines. For obvious reasons, counterfeiting operations were best carried on in the same way, and it was simple to combine the two occupations. The link between counterfeiting and horse theft had an effect on the distribution of regulator and vigilante movements. Therefore, these groups, dedicated to fighting exorbitant legal fees and the corruption of appointed officials in the frontier, as well as those who punished horse thieves, tended to be found in wilderness areas, closer to state lines, or nearer Indian villages.