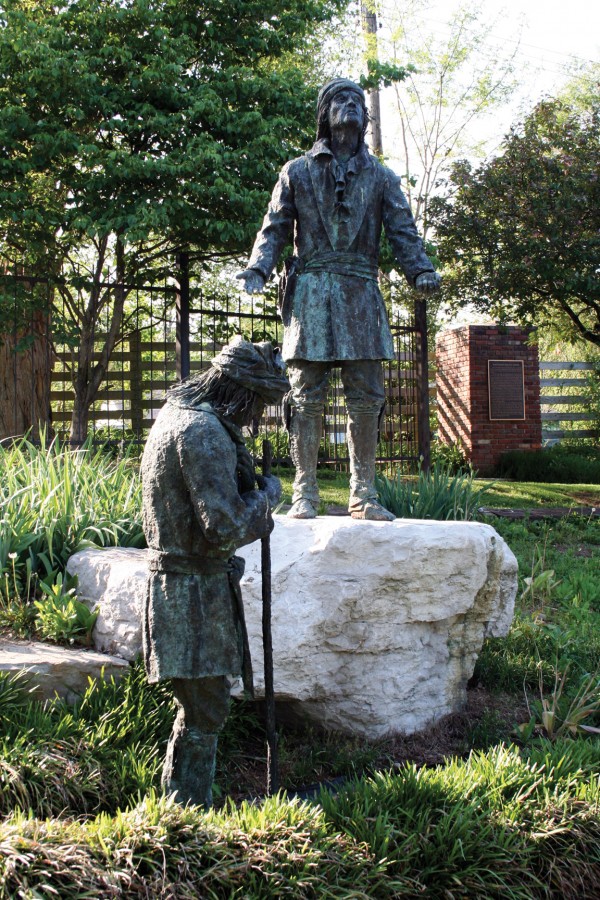 A little known feature stands at the Northeast Georgia History Center, located on the campus of Brenau University in Gainesville Georgia. It is the 18th century cabin of full blood Cherokee Indian Whitepath. The cabin was originally built about 1780 by his parents and was near the site of the historic Cherokee town of Turniptown (Ulunyi), not far from the historic township of Ellijay, Georgia.

Chief Whitepath was born in 1761 near Ellijay and grew up in the cabin. He was described as “a tall, good looking Indian, with a commanding appearance and earnest manner” about him. His Cherokee name, Nunna-tsune-ga, translates literally as “I dwell on the peaceful path.” A skillful orator and strict follower of the traditional ways, he frequently spoke out at the Cherokee National Capitol at New Echota against ceding land to the white settlers and about the influence the whites were exposing the Cherokees to. He objected to the new Cherokee Constitution and the introduction of Christian Missionaries into their lands.

In 1814 Whitepath joined General Andrew Jackson to fight the Creeks at the Battle of Horseshoe Bend in Alabama. He, along with Junaluska and Going Snake, led 600 Cherokees in a successful attack against a thousand Creeks. He was instrumental in securing victory for Jackson when his small party stole the Creeks’ canoes, cutting off their escape by water. As a result of his assistance and serving as a translator in the Cherokee Nation of Georgia, he was given a reprieve from going on the trail with his people, but chose to stay with them instead.

The fall of 1838, at the age of 75, Whitepath helped to organize the removal from the Eastern Indian Territory, later known as the “Trail of Tears.” He and other Cherokee leaders realized that the best chance for survival lay in an orderly march to Oklahoma and they arranged for ration stops along the trail. Both he and Fly Smith fell ill upon leaving Nashville, both arriving in an army wagon on the stop near Hopkinsville, Kentucky. Chief Whitepath died after several hours of arrival and was buried beside Chief Fly Smith who also died during the night.

When the land lottery of 1832 was held, the cabin and the land were awarded to the Pinson family. During Whitepath’s time, the cabin consisted of a single large room downstairs with a loft above. The Pinsons, who were white settlers, later added a dogtrot central hallway and another room downstairs.

The cabin was removed and relocated in 1982 by Counte L. Cooley, a descendent of Whitepath and James Mathis. It was removed from the Cooley property in Gainesville in 1995 to the campus of Brenau University, where it remains today.  An extensive effort by the entire Cooley family was made for the preservation and restoration of the house to salvage this important part of their family history.

Leslie Barker Thomas is a resident of Ellijay and the President of the Gilmer County Historical Society, President, Georgia Chapter Trail of Tears Association.