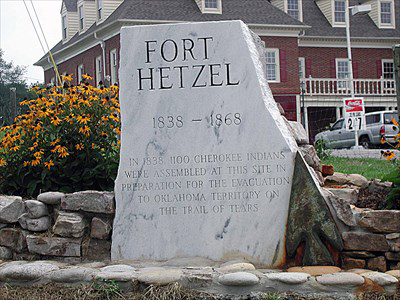 May 26, 1830 the National Congress passed the Indian Removal Act. Andrew Jackson was adamant and worked ever diligently toward this end signing it on June 30th.

In late 1830 Governor George Rockingham Gilmer requested that certain individuals of “good character” be exempted from the Removal Law provided they take an oath of allegiance to the State of Georgia and relinquish their rights under the Cherokee Nation. He declared there were two types of Cherokees, one ruled by the elite mixed bloods and one aboriginal that were easily corrupted by the vices of the white men infiltrating their presence with alcohol and other vulgarities.

Some of the early white settlers who had Indian wives and mixed blood families were given permission from the Cherokees to farm the land. Several Cherokee families were given a reservation for life. This meant they could use the land and plant it for profit but they could not sell it or give it away. At the reservist’s death, the land was to revert back to the state of Georgia. Those granted the status of “fee simple” could sell the land or give it away as they so chose.

In 1837 Adiel Sherwood 1791-1879, one of the most powerful Missionary Baptist minister pioneers in the state of Georgia was reported to have come through Indian Territory of Georgia. He listed townships and detailed the features of the various towns, such as stores, doctors, and houses. This listing became of the first Gazetter for the Georgia. These records indicate that in 1837 various militia officers were ordered to set up and erect huts, stables and other buildings as necessary towards the removal, under the auspices of protecting the Cherokees from the intruders.

Prior to the militia taking up residence, all slaves and Indians had to have a note from a white man or be accompanied by a white person in order to purchase any items from the local mercantiles or trading posts. Some counties have old store records that show activities and purchases made during the time prior to the 1837-38 removal efforts. Gilmer county library in Ellijay Georgia has a copy of the Coke Ellington Store ledger detailing the influx of the militia for the establishment of Fort Hetzel.

December 1837 saw requisition for supplies coming in from Fort Cass near Charleston S.C., in the form of 36 barrels of flour. Dr. Sarah Hill, independent researcher working with the Georgia Chapter of the Trail of Tears Association and National Park Service found records at the National Archives detailing some of the militia efforts to establish some five actual forts and several removal encampments. Records indicated that more flour was sent in January of 1838 and by the end of the month it was noted that there were rations available for 30,000 with 7,500 bushels of corn and a proportionate amount of hay and fodder.

Orders were sent to start foraging for the local ponies in order to use them as packhorses. It is noted in letters that the Indians and citizens are becoming much alarmed at the events. Indians are saying they would rather fight than go and the Creeks living in the area that had been essentially hiding out since their own removal efforts in 1827 had taken up with the Cherokees resistance. The militia requests more arms and ammunition be sent immediately.

In February 1838 it is noted in the letters from the quartermasters that the Indians are now under the mistaken notion that the troops are there to protect them. The militia does not tell them otherwise. The Indians have begun planting and are making repairs to their buildings.

The last week of May, 1838 the roundup effort begins with earnest. Militia officers solicit local men to assist them in rounding up the Cherokees and whatever straggling Creeks may be found in each county. They attributed whatever successes they were having to the fact they had “broken up families and had not given any of them time to gather up their belongings.” Troops moved their wards ever northward towards Moccasin Creek in Tennessee.

Many of those removed have very American sounding names; Alberty, Berry Crittenden, Dobbins, Keith, Hendricks, Owens and Sanders to name a few. Others bear names that sound very Indian; Wolf, Jaybird, Squirrel, Terripin, etc. These are listed in a book by James W. Tyner called THOSE WHO CRIED; The 16,000. This book is available at most libraries in the south.