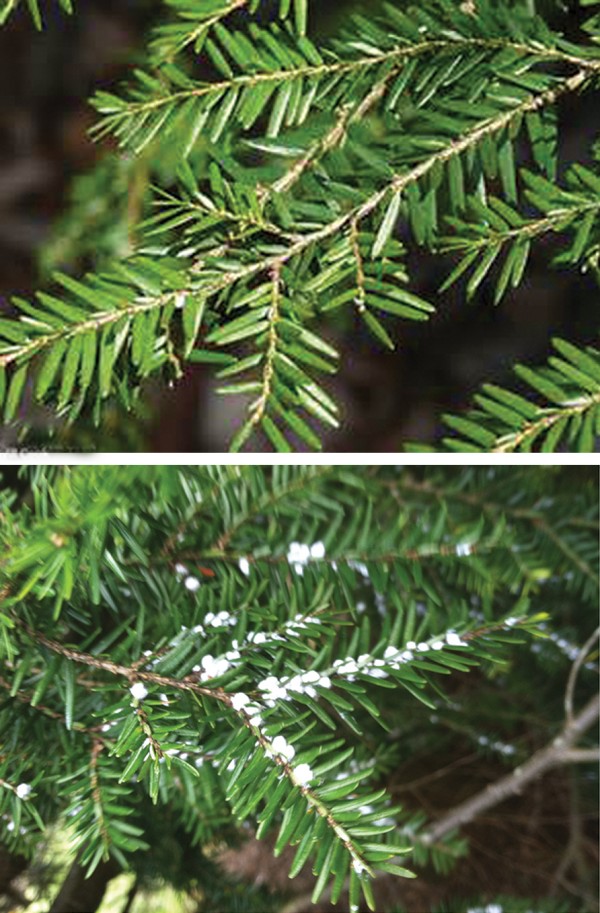 Several years ago, while serving as grounds supervisor at a college in north Georgia, I became aware that our beautiful eastern hemlocks were under serious threat by the sap-sucking insect Adelges tsugae, known commonly as the hemlock woolly adelgid. Within a couple months, I discovered the hemlocks on campus had become infected– the hemlock woolly adelgid had invaded Georgia. After researching how to combat an adelgid infestation, and how to save our trees, I found that there were a few different treatment options available.
The goal of this article is to provide some basic information about both the importance of hemlock tree and how to protect it from the woolly adelgid. An educated public is critical when dealing with any environmentally destructive insect, and this is no different. I’ve met so many people that have hemlocks growing on their properties and didn’t know their trees were infested and dying. Experts compare the potential loss of the hemlock to the loss of billions of chestnut trees due to an Asian bark fungus in the early 1900’s. While there wasn’t any treatment for the Chestnut, we can treat and save our hemlocks.

There are two species of eastern North American hemlock: Tsuga canadensis and Tsuga caroliniana. Both are pyramid shaped evergreens that grow in hardwood forests, and are often found growing in coves and along creeks and rivers. Reaching heights of 60-80 feet, they thrive on north facing slopes, which are cooler and shadier. The eastern hemlock range encompasses an area from north Georgia all the way into Canada, following the Appalachian mountain range.

Hemlocks are extremely important in our ecosystem as they provide shade for our streams and rivers, which helps keep the water cool enough to support our native trout species. For some birds the trees are more than beautiful, they’re essential. Wherever hemlocks grow, their dense evergreen canopy creates a cool, shady habitat that’s used by 90 species of birds. Those most affected by the loss of hemlocks are black-throated green warblers, blackburnian warblers ovenbirds, hermit thrushes, blue headed vireos and acadian flycatchers, with some populations declining as much as 93% where the woolly adelgid takes its toll. Warblers, wood thrushes, brown creepers, winter wrens, and many others also depend on hemlocks for nesting and foraging. Other species including native reptiles, squirrels, bats, butterflies and bear are part of the ecosystem supported by hemlock-hardwood-pine forests.

In the 1950s, the hemlock woolly adelgid was accidentally introduced in Virginia and quickly spread to several states along the Eastern United States. Related to aphids, this non-native insect, measuring about 1.5mm long comes from eastern Asia, where there– it is only a minor pest. Sadly here, the same is not true.

We typically identify infestation by the appearance of cottony nests that the adelgids produce. As infested hemlocks decline, this cot-tony nest becomes harder to detect. The woolly adelgid reproduces prolifically causing trees to die within just a few years of infestation. Birds, wind, people, deer and other wildlife as well as nursery stock can spread the insect. Regrettably, the woolly adelgid has no natural predators that might otherwise keep this insect in check. The adelgid is a cool season insect feeding on hemlocks generally from October through the winter months and this is when their nesting becomes evident. During the hot summer months, the in-sect enters a state of dormancy, so an infestation can be more difficult to detect by the homeowner. Having an expert locate, identify and treat your hemlocks sooner rather than later may just save your trees.

With hemlocks covering 19 million acres in the eastern U.S., we’ll lose a lot of habitat– and wildlife– if we do nothing to combat the hem-lock woolly adelgid.

As I mentioned at the opening, the good news is a hemlock woolly adelgid infestation is treat-able and there are a couple different systemic insecticides that provide several years of woolly adelgid control. In the August/September issue I’ll provide several tips for keeping your lawns healthy and growing during the challenging summer months.