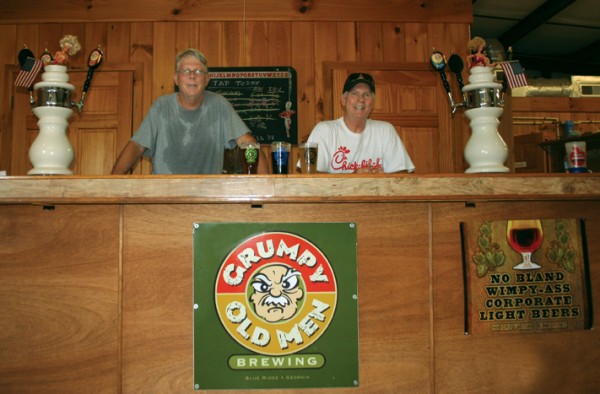 When backyard brewers Jim McKnight and Steve Weber realized they were working hard and creating more craft beer than they could drink- they figured what the heck- why not generate some income from their hobby? Now that hobby that has gone viral.

Grumpy Old Men Brewing (GOMB), founded in October of 2012, officially opened their doors on July 4th 2013. With one part-time employee– brewer Scott Hirons, aka Grasshopper– the three of them keep their recipes simple, they find a brew they like, and then recreate and modify it to their taste. The GOMB corporate mission statement says it all, “If we don’t like it, we don’t drink it. If we don’t drink it, we don’t sell it.” That motto seems to work for them as their business has grown to state wide distribution throughout Georgia. GOMB is also licensed in North Carolina and working on their distribution model.

While wider distribution is key to making a buck or two, contributing to the growing craft beer revolution in Blue Ridge is what keeps them in the hops. “We would like to be an integral part of making Blue Ridge one of the top craft brewing destinations in the area,” Steve says, “as the community grows, so does our business.” GOMB brews can be found in nearly every licensed to sell establishment in Blue Ridge:

As you might have guessed nothing goes to waste in a small town. GOMB “donates” their spent grain and hops to local farmers and hunters by leaving buckets of the stuff in their driveway for anyone to pick up on a first-come-first-served basis. Pig farmers, worm farmers, dear hunters and boar hunters from as far away as Murphy, NC all benefit from the spent grains and have even been known to argue over who gets it!

“We’re just a couple of old retired guys who were home brewing in an outdoor shower and graduated to this. It’s all just for fun and to keep us out of trouble.” says McKnight. “When it’s not fun anymore, we’ll sit on the front porch of the brewery, drink beer and watch Grasshopper work. But, we’re still having fun which is why we’re still involved in the day to day operations!”

Open on select dates for tours and tasting.
Check their web site or find them on FaceBook for dates and times.