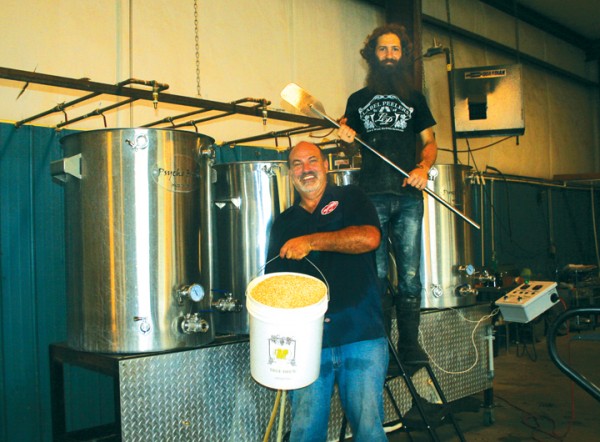 During program-buying trips for German Kino Plus, the TV network he founded in 2007, Tom Fennell spent his free time in the bier gartens of Munich. Over a mug of Augustiner, Tom thought about what else he could sell to German expats – bread? pickles? BEER! Hey, wait a minute, he thought, everyone loves beer! A business was born.

Stateside, Tom leveraged his experience making wine (he’s owned both a home and vineyard in Blue Ridge since 2002), and began home brewing beer. He connected with Pat Walker of the Blue Ridge Brewery, and in the summer of 2012 the two formed a unique partnership.

By October of that year, Fannin Brews were on tap, and Tom got invaluable feedback from BRB customers. He tested many styles of beer, and tweaked and refined 19 different recipes.

By June 2013, thanks to a deal with Eagle Rock Distributing, Fannin Brewing’s flagship brands – Hiawasee Golden Ale and Toccoa Brown – began to show up on taps all around Blue Ridge, and as far away as Cartersville. And in just a few short months, FBC hit capacity – it was time to jump the Blue Ridge Brewery nest and find a home of its own.

In November, Tom signed a lease for a new space on East First Street, and began the long licensing process. A small, successful Kickstarter campaign helped the company cover the costs of setting up the space, while a more substantial fund raising effort, currently underway, will subsidize an even larger brew system.

A calendar of beer offerings is now available, with at least 4 beers available to retailers at any given time. “Distribution has exploded this summer,” says Tom’s wife Jody, who oversees sales and marketing. “You’ll find our beers all over the mountains, from Blue Ridge to Ellijay, from Dahlonega to Clayton, from Helen to Hiawassee – our retail sales have grown more than 600% this summer.”

But the real fun, Tom confides, happens in the tasting room. That’s where Tom and fellow brewer Micah Stuart get to test new recipes. Each Friday from 5:30 to 7:30 and Saturday from 1:00 to 5:00, the team throws open the doors and invites the public in to try new brews. For just $10, visitors can purchase a souvenir glass and sample up to 6 beers. Visitors might find brews like Red Headed Woman, a blond ale made with Mercier’s strawberries, or Chief Whitepath White IPA, made with lemongrass and lime-leaf tea. There’s always something fun going on, too – including live music, special promotions, and SEC football.

“We’re proud to be part of an adult-beverage renaissance in Blue Ridge,” says Tom. “If this is what has happened in just 4 years, imagine what fun we’ll be having in 2018!”