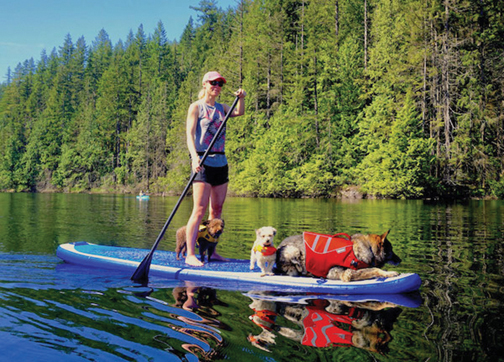 Hey ACL readers! It’s JR once again, here to get you off the couch and out into nature right here in our own backyard. We have several large lakes to explore:  Carter’s Lake, Lake Blue Ridge, Lake Nottely, Lake Chatuge, and just up the road, Lake Hiawassee. All of these bodies of water make a great places to explore on a Stand Up Paddle board.

While Stand Up Paddle Boarding (SUP) blossomed in popularity in the early 2000’s, modern paddle boarding can be traced back to the Hawaiian Islands circa 1940. John Ah Choy was a local Hawaiian surfer. As he aged he could no longer get up on his surfboard, as he once did, so he decided to paddle his surfboard from the shore standing up, catching waves while already standing on his board and thus the began the origin of the sport. Soon after, other surfers were paddling out standing up on their boards taking photos people taking surf lessons (mainly tourists) who wanted their lessons captured on film. Eventually SUP became an activity all of its own. The sport has taken on many shapes and forms over the years, from racing, and exploring, to fishing, paddling with your dog, and even SUP yoga.

Now, I’m here to tell you, that getting up on a SUP for a couple hours is not for the faint of heart. Stand Up Paddling is a total core workout, and you’ll feel every muscle in your body after doing just a couple hours of paddling. A good center of balance and awareness of your surroundings are key. Weather certainly is a consideration, you may have headwinds, chop, and other obstacles such as logs or sticks to navigate. Being on the water can be tiring– UV rays, wind, and the beating sun are always elements to consider, so plan accordingly.

Several outfitters rent boards and offer tours locally, so this may be a good place to start. Once you’re hooked, buying a beginner board will run in the mid-hundreds, expert boards can run upwards of thousands of dollars depending on what aspect of the sport you’ll use it for. My son and I have had some previous experience, so we took right to spending SUP time on the lake. I personally want SUP on the river when dam is released to experience higher and faster moving waters. This would not be a good idea for beginners!

The boards we use are rigid type inflatable boards for ease of travel and storage. We also use safety gear such as helmets and life vests when necessary, it’s always best to use your better judgement, as only you know your true skill level. There’s lots of opportunity to go exploring, paddling back into the nooks and crannies that can only be reached by water.

Plan your outing with safety in mind. Being aware of your surroundings, always consider weather and other lurking dangers. Putting your SUP into the right environment for you is very important. And so is sunblock. Until next time–  cowabunga dudes!  ACLM

JR Ferjak is a self-described renaissance man, with residences here in Mineral Bluff and Dahlonega. A professional high performance on and off road driving instructor, JR offers private driving lessons with a future off-road driving clinic in the works. His passion for the outdoors draws him to many adventures far from the norm. For more information you can try to catch up with JR by email: Jferjak1@gmail.com.