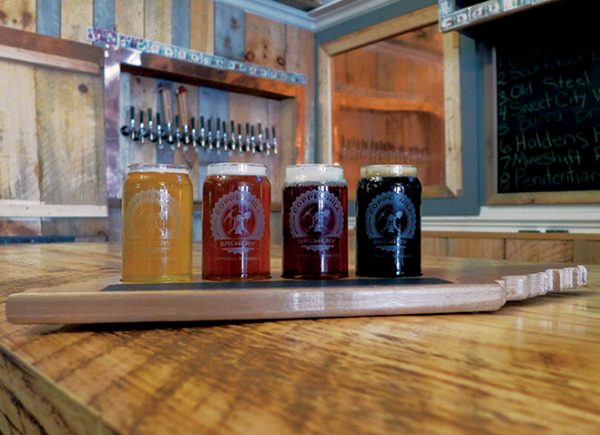 Harrison and Pam Abbott spent many weekends at their second home in Blue Ridge, finding it harder and harder to return to their Acworth home each time they visited. Enjoying the local festivals, restaurants, and of course the local brewery scene.

Secretly on the lookout for a full-time home in the mountains, one afternoon Pam called Harrison, and said, “Let’s just take a look at this home for sale.” They called their realtor, toured the home, and before they knew it, their Acworth home was on the market. They were about to be full time residents.

The Abbott’s were fortunate to be able to relocate full-time to Blue Ridge. Harrison, working for himself in commercial lending, and Pam, a COTA/L, made moving to the mountains an easy transition. Pam began managing their cabin as a rental while continuing to work rehab. However, Harrison, working his own gig from home, still had a nagging desire to fulfill his dream of owning a brewery. With the new development happening in McCaysville, GA and Copperhill, TN, they saw the potential to start their brewery in the Copper Basin. What better place for them place for them to invest in a growing community. Harrison found the perfect location in Copperhill for the brewery and after signing the lease, construction began. But what to name the brewery? The Abbott’s immersed themselves in learning the history of the area, and the heritage left by the now closed copper mines.

Pam and Harrison discovered the best source for this local historical data was the Ducktown Basin Museum. Located on the historic Burra Burra mine site, which was the headquarters for Tennessee Copper Company and Cities Service mining operations from 1899 through 1975, the Museum offers a wealth of information. The site, now owned by the Tennessee Historical Commission, has been listed on the National Register of Historic Places since 1983.

This was all the inspiration Pam and Harrison needed in naming their new establishment the Copperhill Brewery. Armed with a logo depicting tools of the trade, a miner’s lamp, shovel and pick, they turned their attention to interior design. In support of the local community, they purchased stark and compelling black and white photo prints from the Ducktown Basin Museum, found miner’s relics and tools, and even added mining-inspired lighting. A few touches of copper around the long and inviting rough-hewn bar complete the design. Even their tag line is reminiscent of mining, ‘Serving Craft Beer You’ll Dig!’ The Copperhill Brewery opened in 2018 on August 4th and has been a friendly hang-out in the community for locals and visitors alike ever since.

Fast forward to nearly one year later and the Harrison’s gamble has paid off. Alan Reis has been an integral part of the brewery from day one, as he and Harrison shared the same vision.With a keen interest in craft beer, Alan has traveled the world to pursue his passion for tasting. After landing a job in one of Blue Ridge’s local breweries, where he was exceptionally trained by two of his good friends, Alan has now become the head brewer at the Copperhill Brewery.

Under his guidance, the brewery quickly grew from 8 taps to 19, all while still brewing on a one-barrel system. Most customers are shocked when they are told the size of the system. While the brewery has maintained an assortment of craft beers capturing many different tastes, it became apparent that a larger system was needed to continue with their progress.

Both Harrison and Alan felt they needed to stay true to the Copper Basin area, which has led Harrison to purchasing a building on Main Street in Ducktown, TN. The new space will accommodate a 10-barrel brew facility and weekend tap room. Guests will soon have the option to visit Copperhill Brewery in Copperhill seven days a week, or visit the brew facility in Ducktown on weekends. The estimated opening date in Ducktown is early Fall 2019. What a way to celebrate Copperhill Brewery’s first year! If you’re interested in learning how to open a brew facility, you can follow their exciting progress on Instagram or Facebook.

The Copperhill Brewery is definitely a casual space where it’s easy to hangout. Play darts, grab a board game or come play trivia on Thursday nights. Bring in your own food, or order from one of the local restaurants, some will even deliver to the Brewery. You can even bring your dog too! There’s often live music on weekends and other special events going on which you can find listed on their calendar. Harrison and Alan are just two guys that love craft beer. They share the same vision, passion, and desire to create craft beer, that will leave you wanting more, so come on by! ACLM