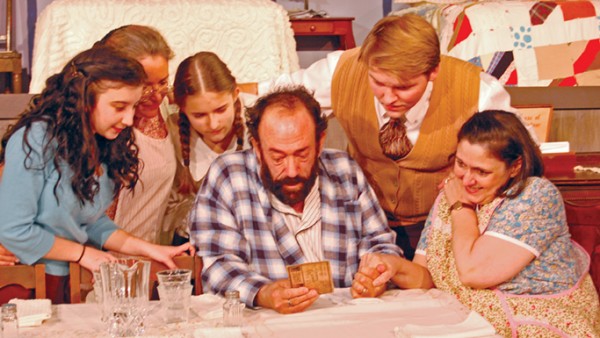 Blue Ridge Community Theater is nearing the end of its 2015 season, with only its Christmas show A Dickens Christmas Carol (November 27 – December 13), left to be produced and performed. This season has held many new and exciting changes for the theater, we received donations to cover a new air conditioning system for the backstage and rehearsal hall areas, a revamping of the entire sound system, and saying “goodbye” to longtime production manager Gina Hawkins as she moved to a new position in Blairsville, and bringing in new production manager Joey Roderick.

Blue Ridge Community Theater is preparing to begin its 2016 season, which will include: Southern Fried Funeral (March 3 – 20) “A southern funeral for the patriarch and the family, friends and loved ones can be just too much! Broadway Bound (April 14 – May 1) “Part three of Neil Simon’s acclaimed autobiographical trilogy finds Eugene and his older brother Stanley trying to break into the world of show business, but at what cost? Drinking Habits (May 19 – June 5) “Bootlegging nuns, mistaken identities, romance and reporters make for one madcap comedy. Play On (July 7 – 24) “Oh the horrors of community theater, when the haughty author run amok interfering with the production of her dreadful show, resulting in one laugh after another.” The Last Romance (August 18 – September 4) “You are never too old to fall in love. The Last Romance is a heart-warming comedy about the transformative powers of love. Wild Guys (September 29 – October 16) “Four guys lost in the woods, no food and one six-pack makes for a real “Wildman” weekend. The Bench (November 25 – December 11) A funny heart – warming Christmas tale.

Sunny D Children’s Theater will produce The Jungle Book (February 5-14) and a fall winter production, yet to be selected that will run October 28 – November 6. These two shows are in addition to their regular two week long Drama and Musical Theater summer camps, June 13 – 26.

BRCT will also continue its Live Music is Better series, bringing back favorites and new musical artists for 2016. This year’s season offers, Copius Jones in January; Roxie Watson in February; Valerie Hines in March; Bergonzi String Quartet (locally known as the Blue Ridge Chamber Music Quartet) in June; La Lucha in July; Diane Durrett in August; Kurt Thomas in September; and Roxie Watson in October. Watch for the announcement of the specific dates.

BRCT holds many opportunities to get involved; they are open to any and all in the community that would like to help out. Every Tuesday the theater hosts Volunteer Day. Volunteers gather at the theater around 1pm to start working on sets, painting, cleaning, and many other jobs that need to be done to bring live theater and live music to Fannin County. They then stop at 4 and enjoy their weekly social times. There are opportunities to assist on show nights by ushering and handling concessions. Volunteers are given opportunities to act on stage or assist behind the scenes. The theater offers several positions, such as stage hands, sound board operator, light board operator, stage manager, and various design opportunities.

Blue Ridge Community Theater President, Patricia Webb said, “We are so pleased about all of the changes, upgrades, and the new season. I have to say a special thanks to the volunteers, donors, and patrons for their outstanding support of the 2015 season. Without their support we would not be able to see such an exciting new year ahead in main stage, children’s theater, and live music

The theater has seen exponential growth in the past few years and is expanding its presence on social media, you can now like and follow your Blue Ridge Community Theater, Live Music Is Better, and Sunny D on Facebook and Instagram.”

Ticketing and production information can be found online at BlueRidgeCommunityTheater.com or by calling the box office Tuesday – Thursday from 1pm -5pm and Fridays from 9am -5pm at 706-632-9223.