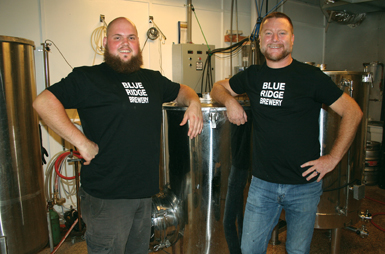 Pat Walker wanted to open a simple microbrewery and his wife Polina– an accomplished cook– wanted a restaurant. With the marriage of the two ideas, they opened the Blue Ridge Brewery (BRB) in 2009. At the time, they were one of only a few restaurants operating in Blue Ridge. There was one drive-through beer barn in town and if you wanted liquor– a drive to Ellijay, GA or Murphy, NC was necessary. The passage of the beer and wine law in 2009- allowing restuarants to serve changed everything. In the past five years, BRB has grown 3-fold in size, they’ve added a complete bar, a full house menu, an in-house live music venue and a craft beer brewing room.

Walker began home brewing in grad school and has home brewed off and on for 20 years. Upon opening BRB he was brewing about 15 gallons per batch, not nearly enough to keep up with demand. With the addition of the brewing room in 2013, he was able to bring that volume up to 100 gallons per batch to date.

At any given time BRB has up to six of their own brews on tap. First-time visitors are likely to order a tasting flight consisting of four brews, while seasoned regulars and locals know their favorites. Many regulars even have their own hand-made signature mugs kept on shelves around the bar.

How do they decide what to brew? With Pat at the helm, he and his brewman, Seth Shelton, kick around ideas. Often starting with a certain style in mind or a seasonal theme– and here the entire staff might have input- they build from there. Obviously the kind of yeast and hops used makes a big difference. When asked about local sourcing of hops, only dry hops used for aroma is available in this area and they hope to start experimenting with that soon.

While the other two production brewers have distributors (required by law for off-premises sales), Blue Ridge Brewery keeps their brews in-house. Although Walker is considering distribution in the future, for now you’ll have to visit BRB to sample some of the best craft brews in north Georgia.