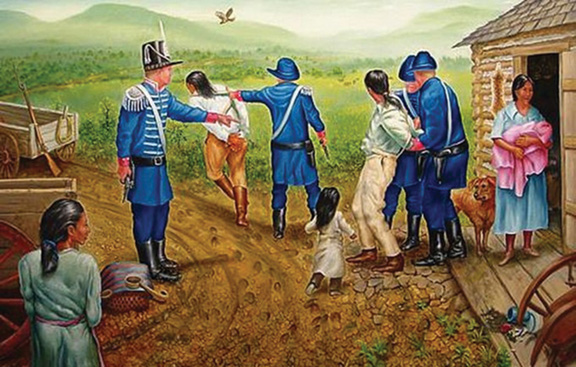 This year, 2018, is the 180th year representing the Removal of the Cherokee from Georgia. There’s a time line of events that precipitated the events leading up to this holocaust of our Native American ancestors. Dozens of books have been written to convey the historical trauma, the monumental volumes of shameful and regrettable losses imposed upon the Cherokees. It’s often a story of a suffering of a banished peoples, so we can develop an “understanding (of) the past so that we can create a better, more equitable future, (this) is what the study of history is all about.” Dwight T. Pitcaithley, chief historianof the National Park Service 1976-2005.

Professor Andrew Denson, Western Carolina University attests in his writings “Acknowledging a history of injustice suggests we are better now”… we reassure ourselves that we will not commit similar mistakes in the present. Since the beginning of colonialization of America, there had been a conflict of effort to civilize the Indians of this continent. The early 18th century saw the British efforts to use the Indians for their own purposes in making the America a profitable venture. “It is always easier to destroy than to make over; and the early colonists were too busy with their own struggle for existence to pay heed to the welfare of those whom they regarded as foes.” John Daniel Hammerer 1740.

We can’t say it’s an anniversary nor even a celebration, more of a memorial to those who once walked the same pathways through our state of Georgia and tilled the same soil. The Revolutionary War 1775-1784 saw the Indians siding with the British in hopes of having the land that had been ceded returned. They knew nothing of ownership at the time when the foreign nations began confiscating their lands. The land had a soul. It had been lent to the Indians to tend and care for it for all time. Land was “owned” in common with the tribe, with the clans. One of the first efforts from the intruders was to convey to the Indians the wonders of individual ownership at any cost.

The timeline is begun with a series of treaties for the ceding of vast amounts of lands. Then moving the Indians further inland from the coasts to the frontiers. By 1802, after the loss of the Revolutionary War and basically the punishment for Georgia’s plight with the British, Georgia’s vast territory to the Mississippi River was divided out into states. America divided out ten million acres for the Cherokees and twenty million for the Creeks, the majority being in the now state of Georgia. Georgia protested the Federal Government and wanted the Indians moved west of the Mississippi.

The Federal Government disputed Georgia’s claim to the land, but in getting them to quit their claim to it, Thomas Jefferson secretly promised that the Federal Government would extinguish title to Cherokee lands within the reserved limits of Georgia as soon as it could be done. It took thirty-six years for this compact between the government and the state to come to fruition through a series of eminent domain claims. Georgia became the guardian of the Indians within her boundaries. Georgia’s first act was the removal of the Creeks in 1827 from the state, which could not have happened soon enough.

The State put deadlines on removal of the Indians, and as each deadline passed without much happening, Georgia forced the issue with the federals to carry out the removal with the illegal treaties of 1830 and 1835 to speed up the process. The 1835 census estimated that only 5,000 had gone west. By the end of 1837 only 1500 more had joined their brethren in the west. On May 23, 1838 the infuriated Georgia government began in earnest to round up the remaining Indians. Troops showed up at the homes of the individuals with bayonets glistening, while families sat down to dinner.

The stories are horrific when told– of the blind and elderly left to fend for themselves. Of children playing in the fields beyond the sight of their parents, left to die from neglect. Of livestock left behind with no care. Of beatings and untold atrocities to women and children. In three weeks’ time, most all had been removed beyond the Georgia state boundaries.
Although the government had promised physicians the majority were dentists with little or no knowledge of how to treat dysentery, births, miscarriages, whooping cough, or heat stroke. Drs. Jordan and Lyde reported upwards of 1600 of their wards were sick and requested assistance of at least one more doctor, in a letter dated July 22, 1838. Dr. Jordan complained that the North Carolinian Indians would hide the dead children from them and refused to take or even give their children the medicines they had for them.

It was reported that 1500 to 2000 died before the removal trip even began. The brutality of troops, their officers, and even Gen. Winfield Scott was lied about to the officials. Those who tried to escape were often shot and left for the wild animals to feast. Gov. Lumpkin’s reports to the state of Georgia’s legislature were most glorious with no word of truth to be found.
Conditions in the stockades were in keeping with the whole forcible eviction story. Musty cornmeal, fatty salt pork or rancid bacon. Flour which was full of weevils. Grains were fed to the soldier’s live stock. This was the time of year when the Cherokees were used to eating fruits and vegetables. The women asked to go look for berries or greens for their families. The cow had been left behind so no milk for the children. They were forced to eat what the soldiers had for them or perish. In some cases, these food stuffs were sold to the locals.

The stockades were strongly guarded, and the Indians were crammed in like sardines. Sanitation was nil with vermin running rampant. Anyone who escaped was recaptured and received a hundred lashes. Broken and beat down the many more deaths along the trail that became known as nu na da ul tsun yi–